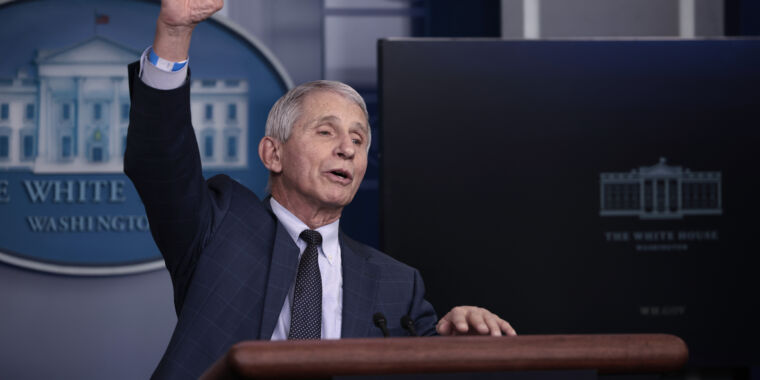 Although booster doses of current vaccines can thwart the ultra-transmissible variant of omicron coronavirus, a massive wave of omicron cases in the U.S. could peak as early as January, officials warn.

Scientists are still struggling to fully understand the variant, which first attracted international attention in late November. However, a few things are becoming increasingly clear: The variant spreads surprisingly quickly and can largely bypass the protection of two vaccine doses. However, people who have received a third dose of vaccine are well protected against serious illness.

At a press conference at the White House on Wednesday, leading infectious disease expert Anthony Fauci reviewed early laboratory and practice data on the vaccine’s effectiveness. Numerous laboratory studies have all shown that levels of neutralizing antibodies from two doses of a vaccine against Omicron are significantly lower – possibly so low that they do not protect against the variant. However, studies looking at neutralizing antibodies after a third dose consistently found a significant increase in protection. One study found a 38-fold increase in neutralizing antibodies to Omicron after a third dose of an mRNA vaccine.

Fauci also presented new, unpublished data from the National Institutes of Health that found that a third dose of a Moderna vaccine restored neutralizing antibodies “well in the area of ​​the neutralizing omicron,” Fauci said.

The lab results are reflected in real-world clinical data, noted Fauci. Researchers in South Africa reported this week that protection from infection by two doses of the Pfizer BioNTech vaccine amid the omicron wave has dropped from 70 percent to 33 percent. However, data from the UK showed that taking a booster dose of Pfizer BioNTech restored the protection and increased the effectiveness of the vaccine 75 percent against symptomatic infections.

The results put a damper on the race to develop an omicron-specific vaccine dose, which Moderna and Pfizer / BioNTech claim to be working on if one is needed.

“Our booster programs work against Omicron,” Fauci concluded. “No variant-specific booster is required at this point.”

That won’t help the US dodge a massive wave of omicron cases that experts are anticipating, however. As of Wednesday, nearly 17 percent of the US population has been fully vaccinated and boosted. And Omicron is spreading fast.

The latest data from the Centers for Disease Control and Prevention suggests the variant accounts for at least 3 percent of cases nationwide within two weeks. In New York and New Jersey, it makes up 13 percent of the cases. The proportion of cases is growing even with a monstrous increase in cases of the extremely transferable delta variant.

The US is currently logging nearly 120,000 new cases per day, and hospital admissions have increased 22 percent in the past 14 days. That week, the country’s death toll reached 800,000.

Amid the surge in the delta, the prevalence of omicron in the US has increased seven-fold in just one week, and the CDC estimates the time doubled to about two days. According to the Washington Post, federal health officials made a call Tuesday to public health organizations warning the organizations to prepare for a huge wave of Omicron cases in the coming weeks. CDC modeling suggests that an omicron wave could peak as early as Januaryinvading health systems while struggling to deal with delta and seasonal flu cases. A second modeled scenario projected a smaller wave in the spring. So far it is unclear which is more likely.

But officials elsewhere are warning of worst-case scenarios similar to the CDC’s initial forecast. European Union officials said on Wednesday that they expect omicron will be the dominant variety in the EU in mid-January. And a senior UK health advisor on Tuesday warned government officials that new cases could arise 1 Million pro Tag until the end of December.