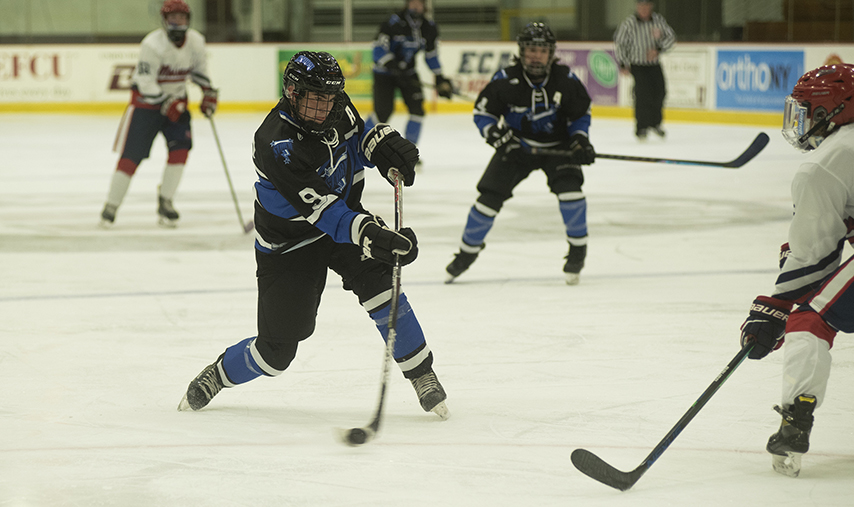 SCHENECTADY – A relentless Storm ice hockey team turned the tables on Saturday for the Mohawks and avenged an opening season loss in a 4-0 CDHSHL shutout at Messa Rink on Union College campus.

The storm overtook the Mohawks 47-17 and apparently hit the Mohawks on every loose puck. Four different players scored in the third annual Hockey Fights Cancer Cup game. Proceeds from the competition will benefit the American Cancer Society Relay for Life events in Schenectady County. This was the third year in a row that the Storm won the event’s trophy.

The Mohawks (0-1 league, 1-3 overall) are a merged high school team with students from Niskayuna, Amsterdam, Schenectady and Albany on the list. The Mohawks won the season opener 2-1 on November 26th.

“We really didn’t start until the second third and we practiced that all week,” said O’Connell. “We have to figure out how to do this for 51 minutes to give ourselves a chance.”

Another merged team with athletes from Guilderland, Mohonasen, Scotia-Glenville, Voorheesville and Schalmont, The Storm opened the third goal of the year for Senior TJ Pierce, aided by a five-minute boarding penalty against the Mohawks one minute into the competition.

“We had a pretty bad warm-up, but the moment we started the shift we put pucks in the net and everyone crashed.” [the net] and the puck just slipped out, ”Pierce said. “I just typed it in.”

The Storm (2-1 league, 3-2 overall) overtook the Mohawks 16-3 in the opening period and sent a message that they would not be hit to the puck.

“We love to play like that,” said Pierce. “We are like white on rice, that is our strength. We’re going on the puck. We will attack it. We won’t give up. “

The Storm’s Axel Konkoski scored his first varsity goal with a one-timer in the final seconds of the second period when the Mohawks began to gain a foothold and match the intensity of their opponent.

“We really didn’t start until the second third,” said O’Connell. “We practiced that all week. We have to find out how to do that for 51 minutes to give ourselves a chance. “

Mohawk goalie Alex Doehla ended the game with 43 saves but was unable to fend off the constant pressure of the storm.

Dylan Bzdell scored two minutes after the third goal after Pierce won a duel and Ty MacDormand-Welsh knocked back Konkoski’s first shot five seconds before the end of the competition.

“We’re scoring goals from all three lines, we’re working on that,” said Storm coach Ryen Young. “We’re hammering the offensive in training and the results are coming. We have a very capable team, capable players and they take over. “

More from The Daily Gazette: