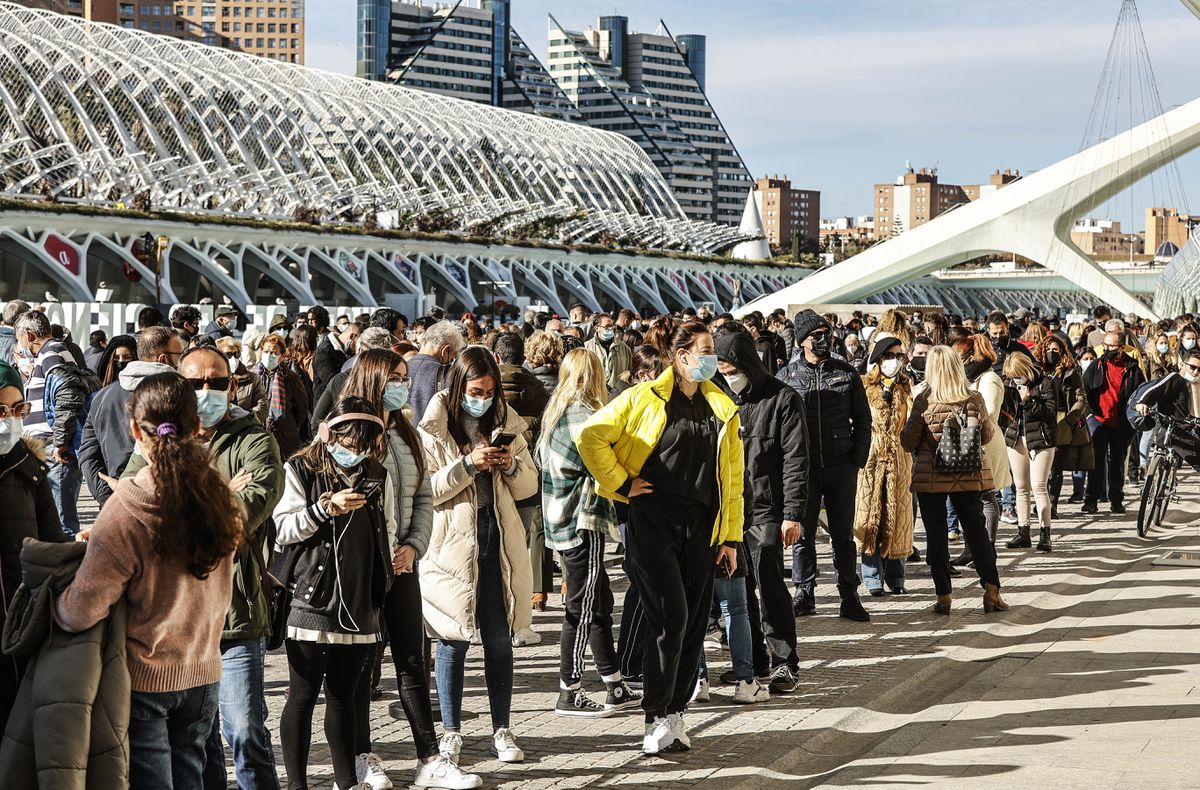 The weapons arsenal to fight COVID has grown at the same rate as knowledge about the virus has increased: masks, teleworking, hand hygiene, interpersonal distance, ventilation, and most importantly, vaccines. Spain trusts these tools everything to weather a sixth wave that continues to rise and has forced other European countries to extreme restrictions, especially on unvaccinated people. Neither the government nor the experts consider it necessary to go to extremes, such as compulsory vaccination with vaccination rates of 90% of the target population. The aim is to overcome this new wave without further restrictions than was already envisaged by the Autonomous Communities and which has been in May ended the last alarm condition.

Health Minister Carolina Darias repeats the message every time she has a microphone in front of her. “We know the measures that protect us. A call to social distancing, to the use of a mask, especially indoors or outdoors when there is no distance. It is still up to us to keep the virus at bay. And most importantly, continue to participate in these vaccination campaigns to continue protecting us from the virus. Vaccination, vaccination and vaccination, and prevention, prevention and prevention are the measures that are within reach ”, were the first words he uttered in the Moncloa press room this Friday after the Council of Ministers.

The government has been reluctant to pass a specific health emergency law throughout the pandemic, preferring to use the laws in force or alert states if those have not been met. Moncloa doesn’t seem to have any extreme measures on its agenda in the coming weeks. She has decided to stick to the policy she has been following since summer 2020: leaving the main management of the crisis to the municipalities and leaving each court to decide, which is then approved by the Supreme Court. This is how all the decisions of the past few months have been handled and the executive is happy with the result, even if there have been some inefficiencies. La Moncloa persistently boasts that the World Health Organization has congratulated Spain on managing the pandemic, and vaccination in particular, and will not move on from there.

Depending on the epidemiological situation, municipalities have scope to limit capacities, restrict opening times or even restrict basic rights. This has been confirmed by the Supreme Court, which has been guiding regional governments since May. While examining each case individually, it became clear that communities can restrict rights such as freedom of movement or assembly, provided that those restrictions are “specific” and “essential” to fighting the virus. Under that interpretation, it rejected any curfews or general restrictions it needed to review, but approved those restricted to small populations with a high incidence of the virus, which made communities increasingly reliant on restrictions on areas with the highest risk of infection, in order to guarantee a judicial confirmation.

The recent rulings of the Supreme Court favor the use of the COVID certificate in nightclubs and restaurants in Galicia and the Basque Country. The judgment served on Friday in the latter case accuses the judges of the Basque Supreme Court of rejecting the measure. “The current differing severity of the pandemic, the less aggressiveness of the disease in many cases, the lower occupancy of hospitals and intensive care units, which on earlier occasions do not justify renouncing the necessary preventions in order to avoid the reproduction of critical moments from the past.” the court.

Eight autonomies have already started implementing the pass, although it is a measure of dubious use in containing infection. according to the technicians who advise both the ministry and the municipalities themselves. In an internal report, they pointed out that it has not proven its effectiveness other than by promoting vaccinations.

It is precisely for this reason that it is used by some countries that are further behind in vaccinating their populations than Spain. But in places like Germany, where almost a third is unvaccinated, The government already has plans to make the vaccine mandatory, something this week has received approval from the European Commission, although she lacks skills in this regard.

Federico de Montalvo, President of the Spanish Bioethics Committee, advocates restricting restrictions on freedom only when other options have been exhausted. Although he considers compulsory vaccination to be justifiable in certain contexts, he does not see the situation in Spain today as follows: “We have been defending it since January, and time has shown us right.”

In an epidemiological and vaccination situation like the Spanish one, Montalvo believes that the authorities should hit the limit today to request the Covid certificate. “And only in the most affected areas,” he clarifies. The bioethics expert believes that it should be restricted to certain recreational spaces and not applied to workplaces.

The problem with many measures, says Ana María García, professor of public health at the University of Valencia, is that there really is no evidence of their usefulness. “We have vaccines, masks, which were certainly the reason why we are better than almost all European countries, but not the COVID certificate or the compulsory vaccination. Years will pass for this and we now need answers. And in a situation of uncertainty, it is a public health maxim to apply the precautionary principle, ”he emphasizes. Under this premise, he considers incentive vaccination with the passport to be sensible, but also compulsory vaccination in certain sectors, as health workers or people who work with the elderly. “People tend to think that the vaccine is just a measure of individual protection and it isn’t,” says Graben.

All headlights are now on the unvaccinated. It is more of a European phenomenon than Spanish, although the debate is already imported. “It is better to limit it than to limit the population as a whole,” defends De Montalvo, who notes that it is no longer possible to solve a gender equality problem, as was the case a few months ago: “Today everyone wants the injection get it for free. If you don’t have it, it’s because you didn’t want it ”.

This tool is a previous step to another type of tighter restrictions on the general population. There are those among hoteliers who refuse to supplement their work with a task that is unfamiliar to them, such as checking certificates, and who warn of organizational difficulties. On the other hand, there are voices in favor of its use, believing that this is the only way to avoid time or capacity constraints that would mean a new penalty for an industry that has been hard hit in the past year and a half.

José Luis Yzuel, President of the Spanish Hospitality Business Confederation, is one of the proponents of accepting this as a lesser evil. “If they shut it down or put a restriction on you, then the pass is welcome. Better to cut off your hand than your arm, ”he compares. The Valencian Community Leisure and Hospitality Business Coordinator (CEOH) has requested that small premises be exempted from applying for the Covid Pass because it is difficult for them to dedicate one person to this task and via an approved fraud prevention application to dispose of.

However, the lack of evidence of the usefulness of the effectiveness of the Covid Certificate raises a lot of disagreement among experts. Some of those consulted insist on promoting what is known to work. Pedro Gullón of the Spanish Society of Epidemiology believes the key is to keep people from gathering in “dangerous spaces”. It has long been clear that poorly ventilated interiors are the perfect place for infection. “We would have to take known and other imaginative measures to prevent many people from crowding into such rooms,” says Gullón.

Teleworking is another simple incentive tool this epidemiologist highlights. “It’s a way of avoiding indoor social interactions that, as we’ve seen, can be implemented in many companies without major social costs,” he says. Offices are becoming environments that people perceive as contagious, said Gullón, who argues that many people have already lost respect for mild symptoms and are going to work centers to avoid applying for short breaks. “These situations can be resolved with teleworking,” he says.