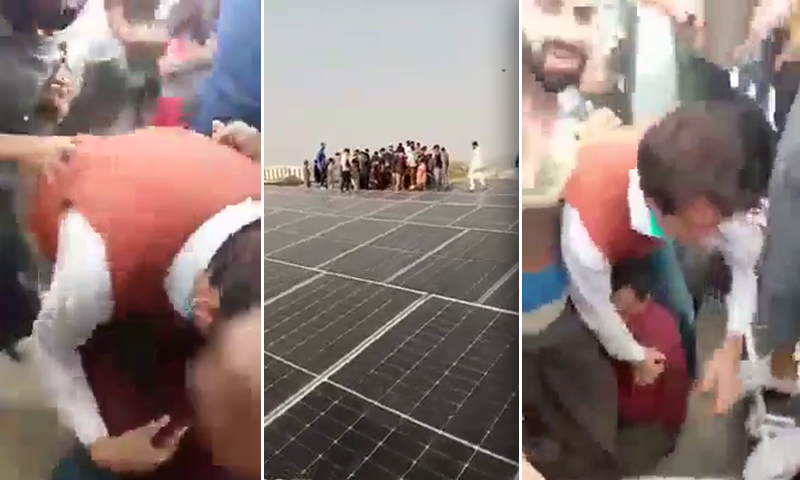 As more arrests were made and the sentencing continued over that Lynchen of the Sri Lankan factory manager Priyantha Kumara in Sialkot on allegations of blasphemy, new footage received from Dawn.com On Saturday it was revealed that a colleague of the man had tried to protect him from the horrific incident from the mob.

Kumara was tortured to death and his body was set on fire on Friday. Punjab IGP Rao Sardar Ali Khan, according to its first report to the authorities AFP, Kumara said he had asked Rajco Industries staff on Wazirabad Road to remove all stickers from factory machines before a foreign delegation arrived.

The workers protested on the factory premises, claiming that he had committed blasphemy. They stopped traffic and joined all factory workers and a large number of local residents. When Kumara saw the mob grow from a few dozen to hundreds, he fell on the roof.

Footage shot prior to the lynching showed a colleague trying to protect Kumara on the roof of the factory he fled to while the mob of about two dozen people slowly grew.

In the video, some of the crowd can be heard chanting slogans and saying, “He (the manager) will not escape today” while the colleague tried to protect Kumara with his body, which was clinging to the man’s legs.

The workers later overpowered the colleague and dragged Kumara into the street, tortured him with kicks, stones and iron bars and killed him on the spot. The mob set the body on fire.

Kumara, a Sri Lankan Christian, had worked at Rajco Industries for 10 years.

The brutal killing was widely condemned by government officials and human rights organizations.

Late on Friday evening, DC Sialkot and the DPO had videotaped a meeting of provincial officials about the details of the incident. They alleged that the deceased was known to be a strict administrator, adding that around 110 suspects were arrested while raids were being carried out to arrest the others.

In a nightly statement, the IGP alleged that two prime suspects, Farhan Idrees and Usman Rasheed, were among those arrested.

On Saturday, the Punjab Prime Minister’s Special Assistant Hasaan Khawar updated the number of arrests to 118, saying that 200 raids had been carried out and that there were 13 main suspects among those detained.

At a press conference in Lahore next to Punjab IGP Rao Sardar Ali Khan, the special assistant said the police had received footage from 160 CCTV cameras and additional video and data sources such as mobile data and call recordings were also being analyzed.

“Significant progress has been made and the investigation is ongoing,” said Khawar, adding that the body would be turned over to the Sri Lankan embassy by the Ministry of Interior and Foreign Affairs.

“Let me reassure you that justice is not only exercised, it is seen,” he said negligently in her duties.

Providing a timeline of Friday’s events, the IGP said that based on information received so far, the incident began at 10:02 a.m. on Friday and escalated to violence and beatings around 10:45 a.m., leading to Kumara’s death at 11:05 a.m. Clock led. He said the police became aware of the incident at 11:28 a.m. and were there at 11:45 a.m.

IGP Rao said a challan will be brought to an anti-terrorist tribunal as soon as possible to bring the guilty to justice.

Sri Lankan Prime Minister Mahinda Rajapaksa said he was shocked by the brutal and fatal attack on the manager.

“My heart is with his wife and family. #SriLanka and her people are confident that PM [Imran Khan] will stick to its commitment to bring all parties to justice, ”he tweeted on Saturday.

Prime Minister Imran Khan called the incident on Friday a “appalling vigilante attack” and added that it was a day of shame for Pakistan. “I oversee the investigation and make no mistake that all those responsible are punished with the full severity of the law. Arrests are underway, ”he tweeted.

The Sri Lankan Parliament also condemned the lynching during its session on Saturday, according to a report from Sri Lankan media organization News 1..

“The government wishes to express its condolences on the death of Priyantha Kumara Diyawadana, a Sri Lankan university graduate and manager of a factory in Pakistan, who was attacked by extremists regardless of territorial borders. The government strongly condemns the inhuman attack that is surprising the world has, ”said Minister Dinesh Gunawardena.

Speaking at a press conference in Lahore on Saturday, Qureshi said the incident was being monitored at the highest level of government, with Prime Minister Imran Khan overseeing the investigation.

“We are in contact with Sri Lanka […] We have kept your High Commissioner informed from moment to moment and I would like to say that you have appreciated Pakistan’s attitude and rapid response.

“This is an incident that has hurt everyone … but they think we can’t blame an entire segment or country for it. she [do] expect Pakistan to bring those responsible to justice. ”

Qureshi added that he will contact the Sri Lankan Foreign Minister today to update him on the latest developments. “They think this is a tragic act, but the Pakistani government and nation have no connection with it,” he added.

Former Chairman of the Ruet-i-Hilal Central Committee, Mufti Muneeb-ur-Rehman, condemned the incident but urged the media not to blame any group or individual before the investigation into the matter was closed.

He said there was no reason to take the law into your own hands if the country had a constitutional and legal system despite all the deficits.

“Anarchy and lawlessness are spreading in society, which do not benefit the country in any way, and a negative image of the country is emerging at the international level,” he was quoted in a statement.