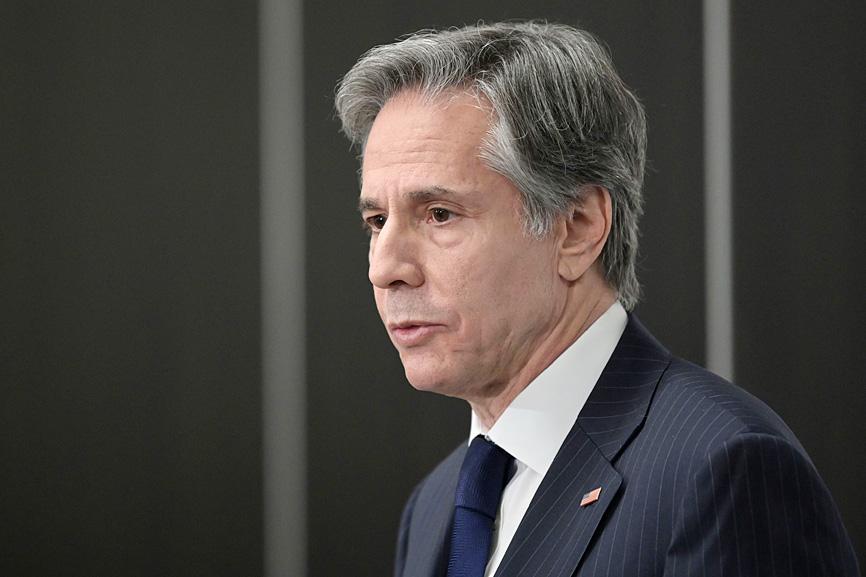 “RESOLVED COMMITMENT”:
Starting a cross-strait crisis would be in nobody’s interest, starting with China, the US Secretary of State said at a conference

US Secretary of State Antony Blinken told the Reuters Next conference on Friday that the Chinese leadership should carefully reconsider its actions against Taiwan and warned of “dire consequences” if China creates a cross-strait crisis.

In an interview, Blinken addressed several foreign policy challenges facing US President Joe Biden’s administration, including sluggish efforts to fix the 2015 nuclear deal with Iran, Russia’s military build-up near Ukraine, and the widening conflict in Ethiopia.

Most acute is likely to be China’s increasingly aggressive stance towards Taiwan.

Defense Minister Chiu Kuo-cheng (邱 國 正) said tensions with China were at their worst in more than 40 years, adding that China was able to carry out a “large-scale” invasion by 2025.

When asked if China would ever invade Taiwan, Blinken said “that would be a potentially catastrophic decision.”

China has tried in recent years to change the “status quo” in the strait by engaging in provocative military maneuvers and trying to isolate Taiwan from the rest of the world, Blinken said.

“I hope that China’s leadership thinks about this very carefully and does not create a crisis that I believe would have dire consequences for many people and that is of no interest to anyone, starting with China,” said Blinken.

When it came to the question of whether the US would defend Taiwan if invaded, Blinken said the US was “determined” for Taiwan and for it to have the means to defend itself.

“We have made it very clear over many years that we are committed to ensuring Taiwan has the resources to defend itself. said blinking.

Blinken also praised Taiwan for its efforts to become a strong democracy, cultivate a strong economy and innovation, adding that Taiwan has made significant contributions to the world.

In other news, the US and the EU issued a joint statement on Friday reiterating their interest in stability and the “status quo” in the strait.

The statement made after US Secretary of State Wendy Sherman and Secretary General of the European External Action Service Stefano Sannino led the first high-level US-EU consultations on the Indo-Pacific in Washington also stated that “both sides a common interest in deepening cooperation with Taiwan in line with their respective “one China” policies. ”

Additional coverage from CNA, with co-author

Comments are moderated. Keep comments relevant to the article. Comments with offensive and obscene language, personal attacks of any kind or advertising will be removed and the user will be blocked. The final decision is at the discretion of the Taipei Times.