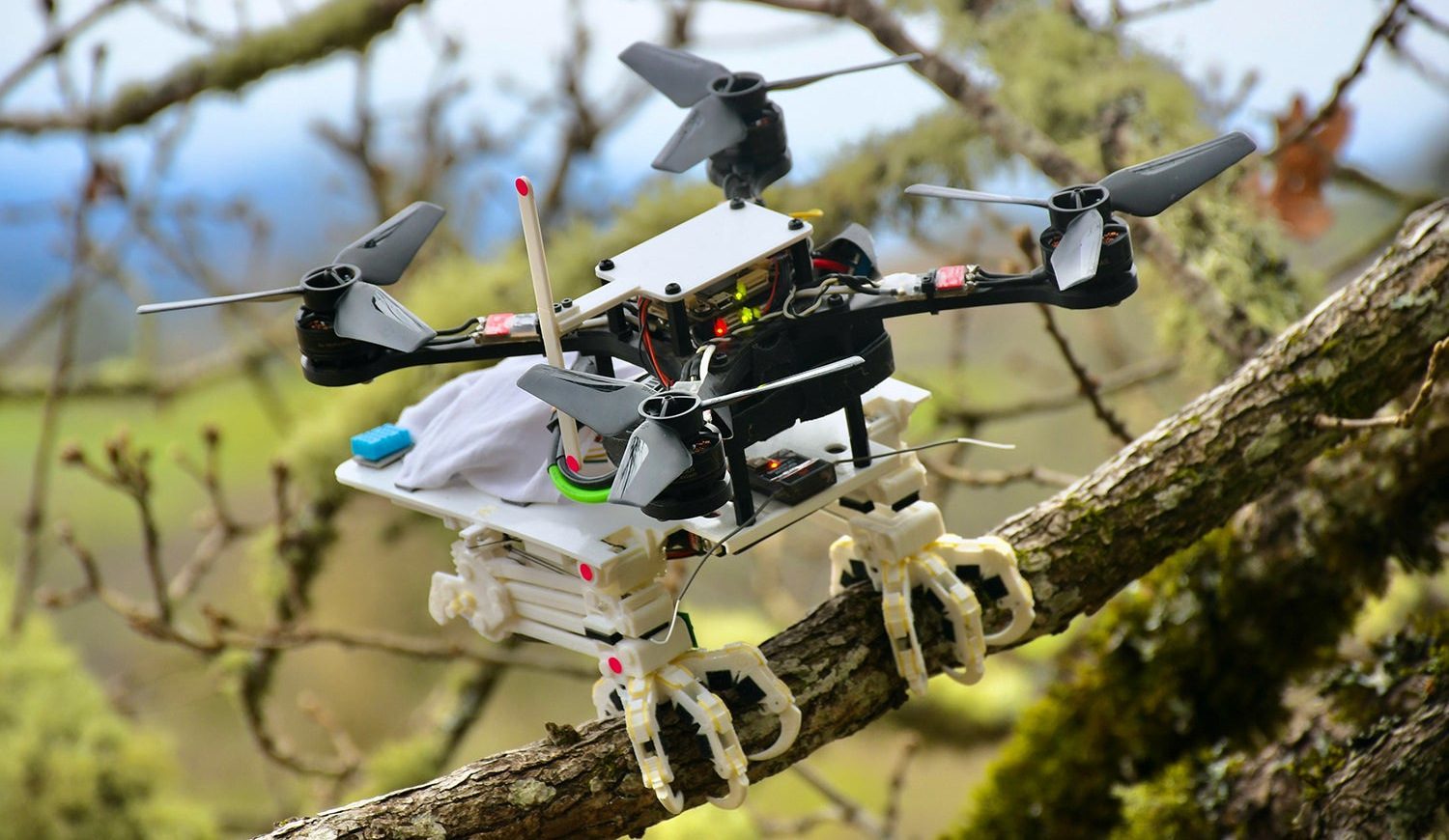 It is well known that birds literally have a handle on safely landing on branches and the like. Following the example of their leg-claw system, researchers have now developed a robotics concept that enables drones to perch on branches or to grab objects. In the future, “SNAG” could enable aircraft to take energy-saving breaks when exploring natural surroundings.

Thick, thin, humped, slippery …: branches can have many different characteristics and yet birds can land on most versions without any problems. Obviously, the function of their claws and legs in combination with their sense of balance can ensure this adaptability. This is a nature concept that is also interesting from a technical point of view. Because so far, the landing capabilities of aircraft on targets with uneven surfaces have been limited. For example, the methods of grasping and settling down in birds moved into the focus of the researchers working with William Roderick from Stanford University.

Investigations of the landing behavior of small parrots formed the basis of their technical implementation of the nature patent. The scientists recorded the animals using high-speed cameras while they were flying back and forth between special perches. The targets had different sizes and consisted of different materials such as wood, foam, sandpaper or Teflon. The perches also had sensors that recorded the physical forces that occurred when the small parrots land, sit and take off.

Analysis of the natural model

“The surprising thing was that the animals performed the same maneuvers regardless of the surface they landed on,” says Roderick. “They left it to the feet, as it were, to react sensibly to the variability and complexity of the surface structure”. The researchers explain that this is not a question of “deliberate” behavior, but rather a knee-jerk stereotypical mechanism that underlies the flexible landing abilities of birds. They then used this principle and other aspects as the basis for developing their concept for the technical implementation of the animal system.

This is how the “Stereotyped Nature-inspired Aerial Grasper” (SNAG) came about – a technical leg and claw system that can be attached to a quadrocopter drone. In order to take into account the size of the quadrocopter, the elements from SNAG were modeled on the leg and claw structures of falcons. The bones are imitated by 3D-printed plastic elements and the function of muscles and tendons is performed by motors and fishing lines. Each leg in the concept has a drive element to move back and forth and another to enable gripping.

Also inspired by the structures and processes used in birds, a mechanism of the robot system absorbs the impact energy during landing and converts it passively into gripping force. The result is that SNAG has a particularly strong and fast coupling that can be triggered and closed within 20 milliseconds, the developers explain. As soon as the mechanism has a branch under control, an integrated accelerometer reports the landing to the system and activates a stabilization function: A special compensation algorithm ensures that the drone is brought into a stable position.

The researchers have already proven the performance of the system through practical tests. In this way, they were able to make it clear that a drone equipped with SNAG can land safely on objects of different design. In addition, small objects can be grabbed and carried away. The experiments documented that the techno claws react so quickly on contact that they can grasp thrown objects such as a sack filled with beans or a tennis ball.

The performance of SNAP was also demonstrated under natural conditions: landing tests on branches in a forest led to promising results, the scientists report. In further developing the concept, they now want to concentrate on improving the preparation for landings in the complex environments. This requires, for example, an optimization of the capabilities for situation detection and flight control of the robot system.

When fully developed, the landing system could have a number of uses, say Roderick and his colleagues. The potential lies above all in flight breaks. Because the high energy demand and the lack of landing opportunities have so far severely restricted the usability of drones. A possible area of ​​application for the system would be for search and rescue operations or for monitoring forest fires. However, the researchers particularly emphasize possible uses for SNAG in environmental research: “Part of the motivation for this work was to develop tools that we can use to explore the natural world,” says Roderick. “If we have a robot that can behave like a bird, that could open up completely new ways of researching the environment,” says the scientist.