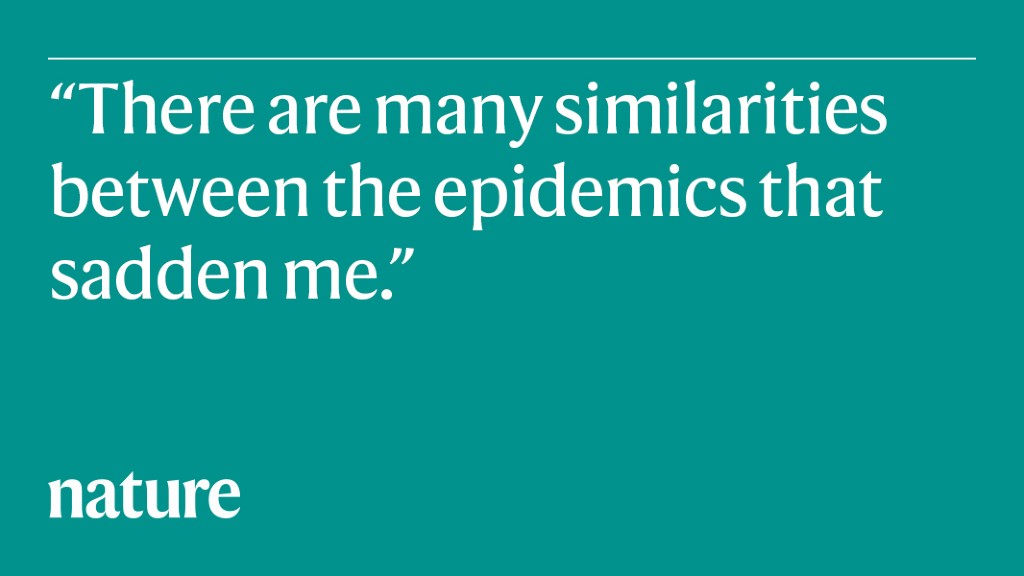 Amid the COVID-19 pandemic, a milestone in yet another global scourge has largely escaped the spotlight. It has been 40 years since the first reports of what eventually came to be known as AIDS were published in 1981. I dismissed the first report as a curiosity and probably a coincidence at first, but changed my mind and the direction of my career a month later from the U.S. Centers for Disease Control and Prevention. Against the advice of my mentors, I shifted the focus of my research to understanding why young, healthy men were plagued by unusual conditions. I remember anxiously waiting for results that were essential in the fight against a disease that was causing so many seemingly disjointed symptoms: pneumonia, blindness, skin lesions, dementia.

This year’s World AIDS Day on December 1st marks both incredible progress and the need for more. In 1983-84, HIV was proven to be the cause of AIDS. Soon there were blood tests to diagnose and screen the supply of donated blood. These showed the enormous extent of the pandemic: Between 1984 and 1985, the number of new AIDS cases in the USA almost doubled. Eventually, advances in understanding – figuring out the sequence of the virus’ s genome and understanding how it decimated the immune system and how the disease progresses – paved the way for dozens of approved therapies.

In 1985, a 25-year-old man diagnosed with AIDS in the United States had a life expectancy of less than two years. Today, a person with HIV can expect to die from other causes in old age. AIDS-related deaths have decreased by 64% since the global peak in 2004. Overall, about 73% of people with HIV receive treatment. Still, nearly 700,000 people died of AIDS-related diseases and 38 million lived with HIV in 2020.

Millions of people were also killed and disabled in the COVID-19 pandemic. The fight against HIV shows the importance of using existing treatments and strategies for prevention, striving for better ones, reaching vulnerable communities, and considering equity, education and outreach. There are many things in common that make me sad: how hard some patient groups have to fight for recognition; how misinformation and denial can fuel illness and death; how slowly interventions reach vulnerable populations; how easy it can be to overlook patient input when setting research priorities.

The 40 years of AIDS were punctuated by times of darkness and hope. In the early, frustrating days of the pandemic, doctors had little to offer our patients. Glimmers of hope came with the treatment of opportunistic infections and the first partially effective antiretroviral drugs. In the mid-1990s, multi-drug antiretroviral therapies changed the prognoses for many people infected with HIV from bleak to excellent. Now stronger, better tolerated drug combinations are available as a single daily pill.

A crucial finding was that antiretroviral therapy both helps those infected with HIV and reduces their risk of transmission: The treatment lowers the virus level in the blood until it can neither be detected nor passed on. Understanding that “undetectable equals inalienable” was a triumph of research and HIV activism that was a driving force during this trip. Pre-exposure prophylaxis is also transformative: giving people antiretroviral drugs before exposure to HIV can be more than 95% effective in preventing infection. I suspect that monoclonal antibody-based drugs will soon play an important role in the treatment and prevention of HIV, as they do with SARS-CoV-2.

Medical advancement means that in theory HIV / AIDS could now be taken off the table as a major health threat (in the United States and worldwide), especially with programs like the President’s Emergency Plan for AIDS Relief and the Global Fund to Fight AIDS, Tuberculosis and Malaria will continue to receive robust support. Unfortunately, things are never that simple. Treatment uptake remains suboptimal in rich and poor communities. Reasons for this include a lack of transportation, poor quality accommodation, mental health problems, substance abuse, pill fatigue, drug toxicity, stigma and discrimination.

So making sure everyone has access to existing treatment and prevention options as we develop better ones is a top priority. The first long-term injectable antiretroviral regimen, cabotegravir + rilpivirine, administered once a month was approved by regulatory agencies earlier this year. An injectable, long-acting form of cabotegravir could soon be approved for prophylactic use.

Exciting work is currently being carried out on further HIV treatment and prevention. This includes developing very long-acting drugs that could be taken every six months or less. And then there are strategies for achieving permanent HIV remission. Some people are working to eradicate the replication literate reservoir of HIV (a concept often referred to as a cure).

A safe and effective vaccine against HIV has been elusive, but even a moderately effective vaccine, along with the rest of the toolkit, could end AIDS as a major health problem. It’s likely that some of the tools and platforms used for COVID-19 vaccines could be built on, including messenger RNA and optimizing immunogens to elicit the most effective immune response.

As AIDS enters the fifth decade, the challenge for researchers is to work with communities at risk to provide treatment and prevention to all of the people in the world who need them.