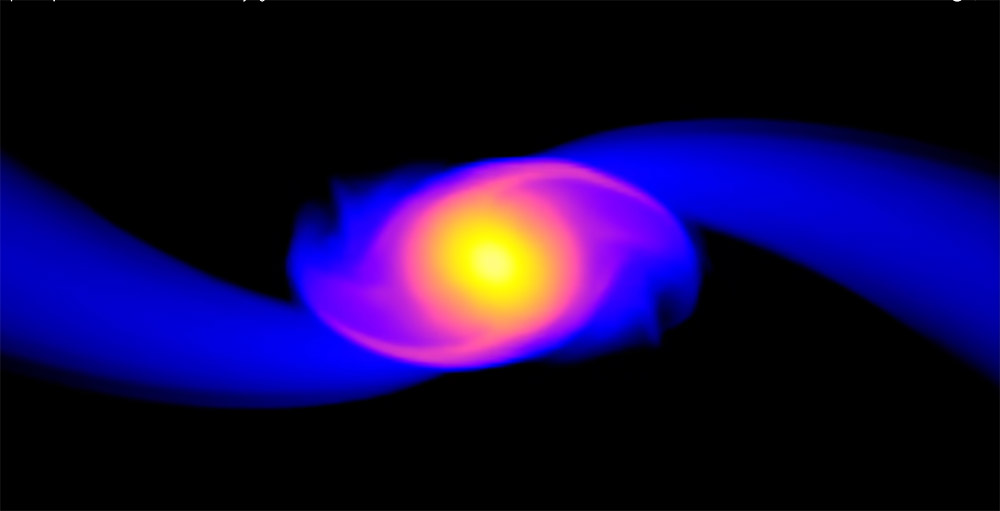 What happens when a star gets too close to a supermassive black hole? And at what distance is the star torn apart? Astrophysicists have now investigated this for the first time in detailed simulations – and discovered surprising things. Because contrary to what was expected, the star’s mass hardly plays a role in its fate. Instead, the mass of the black hole and the central density of the star are more important, as the team reports in the “Astrophysical Journal”.

In the center of the Milky Way and almost every other galaxy sits a supermassive black hole. Its gravity accelerates nearby stars to extreme speeds and leads to a rosette-shaped shift in their orbit. But if a star gets too close to the black hole, it threatens its end: the tidal forces first stretch it out like a spaghetti, then it is completely torn apart. Part of the star matter is swallowed up by the black hole, the rest is ejected.

When does it get dangerous for a star?

But at what proximity to the black hole does a star pose a threat? And what factors influence his fate? Astrophysicists working with Taeho Ryu from Johns Hopkins University in Baltimore have now examined this in more detail for the first time. To do this, they developed a series of simulations, the first one, that link the physical effects of Einstein’s general theory of relativity with realistic models of the internal structure of stars.

The aim was to find out where the tidal radius (rt) lies – the distance from the black hole from which a star is torn apart by the tidal forces.

The simulations revealed something surprising: contrary to what was expected, there was no clear connection between the star’s mass and its fate. Some smaller and larger stars survived even close approaches. They were only temporarily stretched and torn, but afterwards they balled up again. Other stars of similar mass ranges, however, were completely destroyed.

“The star begins to be stretched when its distance from the black hole reaches the tidal radius,” report Ryu and his colleagues. By the point of its closest approach to the black hole, the star is already extremely distorted and pulled apart. In the process, more and more material is being withdrawn from the black hole. “The substantial loss of mass continues until the star has moved a long way from the black hole,” explain the researchers.

“The physical tidal radius remains almost constant over the range of 0.15 to three solar masses – and thus over a range that includes the overwhelming majority of all stars,” write the astrophysicists. This only changes with very large star masses. As expected, another factor turned out to be the mass of the black hole itself: the larger it is, the further out the tidal radius is.

But why are some stars more resilient than others regardless of their mass? Closer analyzes showed that all the stars that survived close proximity to the black hole had one thing in common: their central density was relatively high. The denser a star is in its inner core, the closer it can fly past a black hole without being completely destroyed.

When is a star torn from the black hole?© NASA/ GSFC, Taeho Ryu/ MPI for Astrophysics

The simulation also showed that partial disruptions occur almost as often as the complete destruction of a star by the tidal forces on the black hole. In such cases, the star is initially torn apart, but clumps together again after passing through the black hole. “Such partial disruptions can drastically shrink a previously massive star,” explain Ryu and his colleagues. As a result, a main sequence star can become a measly remnant of a star, which may then be finally destroyed on its next passage through the black hole.

Ryu and his team identified the star’s angular momentum as one of the deciding factors in determining whether a star is completely or only partially torn. The simulations also provided new data on how much star material remains after a tidal disruption. The astronomers hope that these findings will now help to better assess the frequency and the course of such catastrophic star destruction in the cosmos. (The Astrophysical Journal, 2021; doi: 10.3847 / 1538-4357 / abb3cf)