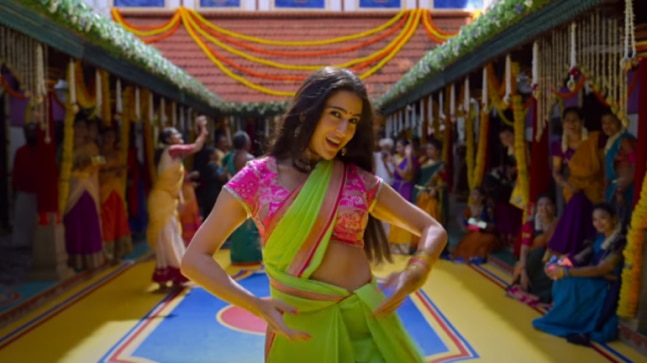 The song Chaka Chak from the upcoming film Arangi Re was released on Monday November 29th. The song features Sara Ali Khan showing off her dance moves when Dhanush’s character was engaged. Directed by Aanand L Rai Atrangi Re, the film also stars Akshay Kumar.

Atrangi Re will premiere on December 24th on Disney + Hotstar. His first song, Chaka Chak, was released. Sara Ali Khan can be seen in the song dancing in a neon green saree and a neon pink blouse. The setup is the commitment of Dhanush’s character. Arangi Re will see Sara romanticize the characters of Dhanush and Akshay Kumar.

The song Chaka Chak was composed and produced by AR Rahman, while Shreya Ghoshal lent the vocals. The text of the song comes from the pen of Irshad Kamil.

Atrangi Re, directed by Aanand L Rai, is an intercultural love story starring Sara Ali Khan, Dhanush and Akshay Kumar. Sara shared the trailer for the film, writing, “The trailer for Arangi Re is out now. I can’t wait to share these magical moments with all of you. Here I present my Rinku to all of my Darshaks (sic). “

Arangi Re was due out on Valentine’s Day this year, but as filming was delayed due to the novel coronavirus pandemic. Now it should appear on December 24th on Disney + Hotstar.

ALSO READ | Aanand L Rai on directing Akshay, Sara and Dhanush in Atrangi Re: I’ll put them in an invisible space

For IndiaToday.in’s full coverage of the coronavirus pandemic, click here.