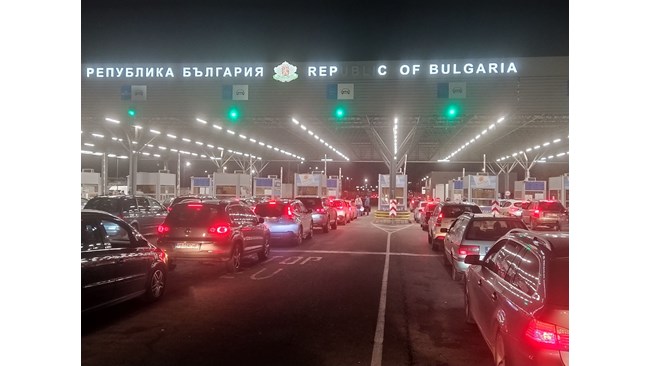 In the markets they collect the money in buckets, Bulgarians carry the purchases in sacks

We do not remember such an invasion! This was granted to “24 Chasa” by the border police from Kapitan Andreevo, who could not serve the Bulgarians who went to the market in Edirne that Saturday and Sunday.

Cars from all over the country, lined up in 6 columns, barely crawled. It took three hours to pass the border controls on the Bulgarian and Turkish side. There were really a lot of cars on the two weekends. Around the clock.

And there’s something for that! Jeans for 15 BGN, a thick winter jacket for 45 BGN, a cotton sheet set for 35 BGN, women’s bags for 5-6 BGN, lemons for 65 BGN, a kilo of quality oil for 10 BGN. Buses labeled “Custom Furniture” also picked up goods and drove them to customers in our country.

“We will sleep here if necessary, but we will enter. Not to be missed. The Turkish lira is 13 stotinki. The cheap is godless in their markets, ”commented Bulgarian women while waiting at the border.

“But half of Bulgaria is here,” joked the driver who loaded the whole family into the car. “We dress from head to toe for no money,” he said. He added that the cheap Edirne was spread all over our country.

At one of the last petrol stations before the border with Turkey, a Plovdiv family actively gave the way to others who were driving for the first time.

“Be sure to go to the Blue Market! There’s chicken milk there and the prices are ridiculous, ”the woman instructed.

“How long have you been going?” She asked the recruits.

“Just for today,” they replied.

“Oh, you won’t have enough time! We often go and spend the night so we can go shopping. It is good to leave the car in the parking lot and visit the two shopping centers, ”the Plovdiv resident continued with the instructions.

Hanging on the edge is really a test. But as soon as the last control from the Turkish side was over, our people stepped on the gas and found themselves in Edirne as quickly as possible.

It is already 12 noon and some have left at dawn. Others are already a few laps ahead.

Bulgarian women carrying shopping bags could barely carry them to the cars to return and keep buying what their eyes saw. All of our compatriots are very friendly on Turkish soil. If a stranger speaks to them in Bulgarian, they stop immediately, guide and advise.

“Oh, you are very far from the Blue Market here. We are on the bus. First we drove from there, and now we have filled the bags with purchases from the center, ”explained two middle-aged Bulgarians and took the bags with them on the flight.

Some of the bus drivers who drive organized groups frown. “Enough! There is no space for a needle in the flight cases. They are robbing for the last time, ”they reproached the insatiable tourists. They responded with jokes and banter.

The record loss of the Turkish lira is

Purchases, but it is

Many don’t hide their fears that their money will melt for days. Despite the concern on their faces, the traders are polite and friendly to the Bulgarians. They are ready to satisfy any whim just to buy them the goods.

In the market hall in the center of Edirne, known as the mini chapel bazaar, self-confident women wanted to have miraculous ointments made in one of the shops. They heard that the ointments removed from here stretched the wrinkles and refreshed the skin of the face.

“But please make this cream for me,” one of the Bulgarians insisted. The saleswoman wondered how she should please her. Most of the dealers speak Bulgarian and Greek.

“I want a suit, but black,” said another. The seller confused her that she was Greek and replied:

There was a real invasion of a laundry and towel shop. A group of about 10 Nashenkas searched all the packages. The set only cost 35 leva.

“I want a blue color,” the customer insisted. The man turned all the packages over to find them.

“Wow, where did you get this bread?” Said another when she saw that her countrymen were carrying warm bread. “There is an oven two blocks away,” they explained. They packed the sheets and ran to the bakery.

However, on the way there, they came across a fish market.

“God, they are arranged like an exhibition”, the big sea bass, sea bream, bonito, mackerel looked at you. The sellers couldn’t. Whoever takes it cleans it on site as a bonus.

You collected the money

Another tail curled yards from the fish. It’s for fresh pie crusts – one of the hits among Bulgarians shopping.

The interest was so great that the Turks could not knead and grind. They looted them in a flash.

“The next ones will be out in 20 minutes,” explained the saleswoman. “I want five packages,” said a blonde woman from Lovech, paying immediately to make sure she received the goods. The package contains 5 large round crusts and costs £ 20 – BGN 2.60. At that time, recipes were exchanged in the queue.

“You don’t need eggs for these bowls. Brush with plenty of butter, sprinkle with cheese, roll and bake for 35-40 minutes. Then sprinkle lightly with water and let rest. It becomes fragile and soft like cotton, ”explained one of the customers.

“How many degrees does the cake bake?” Asks another. “That depends on the stove,” said the Lovech woman. Recipes for cakes with spinach, leek and whatnot followed.

However, the bark in question does not last long and must be used within a week as it will not be dried. “Oh, nothing like that! I distribute them in packages and put them in the freezer. Then I take them out, they thaw and it is as if they are now sharpened ”, called a third. For Christmas she made a cake and a pumpkin pie out of it.

It’s 7 p.m. and the flow of Bulgarians in Edirne’s shopping centers doesn’t stop there. Jackets, fur coats, blouses – they were bought by the kilo.

“Hey, this coat costs 54 leva, in our country it will be at least 120. I’ll take it with me, ”said a man while measuring. “Come on, come on,” his wife called to him at the blouse stand and handed him a measure. The number costs 8 leva.

Those in a hurry returned to the cars. And others went to restaurants.

“Save for 20 people tonight. And definitely a liver tray, ”a guide ordered at lunchtime. “No problem. We’re on two floors, there are seats, ”replied the owner while pouring lamb kebab, chickpeas and lentils.

“People go to Edirne to shop for a long time, not for a day. You have to take so many things with you that you have enough for a month, ”explains the saleswoman from a grocery store in nearby Svilengrad. The people from there got everything from Edirne – building materials, furniture, provisions, medicines.

Crossing the border to Bulgaria on Saturday evening also turned out to be exhausting. Columns of buses hung with tourists for hours.

“Just so we don’t mix up our delicacies when we arrive at the sleepy dawn,” joked one man. The suitcases over the seats in flight could barely hold the purchases.