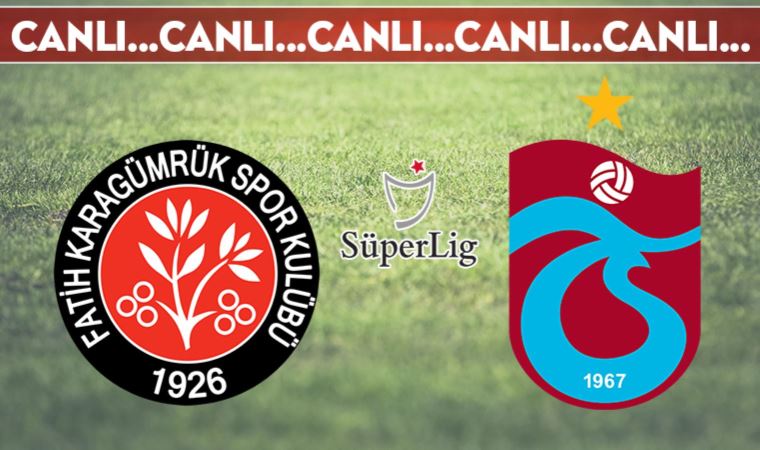 Trabzonspor is visiting VavaCars Fatih Karagümrük for the 14th week of the Spor Toto Super League.

61 ‘GOAL | Abdülkadir Ömür’s perfect goal made it 2-0. Nwakaeme, taking the ball that Hamsik sent to the left wing, dropped the ball outside the area in front of Abdulkadir. When Abdülkadir Ömür fired a hard shot, the ball went into the net.

51′ Djaniny, who intervened at Caner Erkin’s short pass, drove the ball into the opponent’s penalty area. Djaninys pass, who tried to pass the ball to the right of Nwakaeme, hit the defense and was left in front of Abdülkadir. Abdülkadir Ömür’s left-footed free-kick on the penalty was just a bit narrow.

48′ Emre Mor, who ran behind the defense, controlled the ball with a pass from Caner Erkin. With Emre’s hard shot, the ball went a little further.

45+1′ Trabzonspor could not benefit from a very clear position. Djaniny, dangling behind the defense, dropped the ball in front of Nwakaeme. The ball went out when Nwakaeme kicked from the available position.

30′ While Fatih Karagümrük tried to pass from behind, Balkovec’s fault came before Nwakaeme. Nwakaeme hit the bottom post with the inside of his right foot, and the ball went straight off the bottom post.

28′ Emre Mor, who hit the ball on the right wing, tried to fold the ball inside to Karamoh, but Edgar, who intervened, took the ball away.

16 ‘GOAL | Djaniny was again responsible for the ball in repeated penalty shootouts. Djaniny’s ball hit the top left corner and went into the net.

15 ′ penalty canceled | Djaniny, who took the ball on penalties, returned the ball from goalkeeper Viviano. Hamsik turned the left open ball into the goal area. The ball hit the defense and went out. With the warning from VAR, the penalty is repeated on the grounds that Viviano violated the line.

12 ′ penalty | Djaniny, who caught the ball in Nwakaeme’s pass, switched to Hamsik’s intermediate pass and stayed on the ground in the penalty area after an intervention by Luckassen. Cüneyt Çakır pointed to the corner, but Cüneyt Çakır, who followed the position on the advice of the VAR, pointed to the penalty spot.

1′ Abdülkadir Ömür grabbed Jimmy Durmaz with pressure and shot the ball. The ball returned from Luckassen landed in front of Djaniny. When he kicked the ball, it went straight off the lower post.

1′ The fight began with the whistle of Cüneyt Çakır.

Referee Cüneyt Çakır will moderate the game, which starts at 4 p.m. in the Ataturk Olympic Stadium.

As leaders of the table with 10 wins, 3 draws and 33 points after 13 weeks, the Kastanienblauen want to defeat their opponent and leave another obstacle behind them on the way to the championship.

VavaCars Fatih Karagümrük is in 6th place with 22 points in the last 13 weeks.