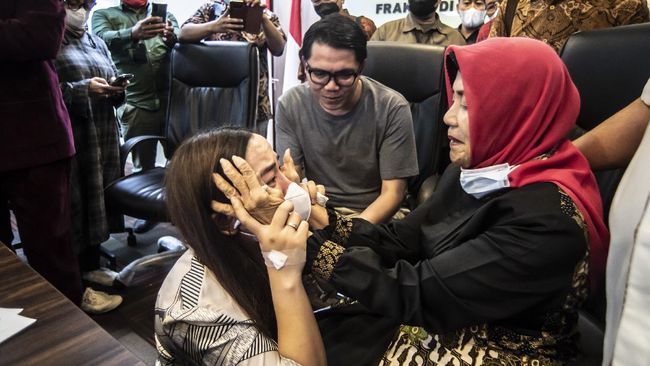 On this occasion the mother of Arteria Dahlan was also present, Wasniar Wahab.

Anggiat is known to have been involved in an uproar with Arteria and Wasniar at Soekarno Hatta Airport last weekend. In the excitement, Anggiat is said to have admitted to being a relative of the three-star general of the TNI, alias lieutenant general.

Now both parties have apologized. At that moment, Arteria Anggiat also asked to apologize specifically to the mother who was the target of the woman’s anger at the Soetta airport.

Arteria also asked Anggiat to sing the Guru Anthem as part of her apology to Wasniar. The punishment for singing the teacher’s anthem was imposed by Arteria because her mother is a retired teacher and it coincides with National Teachers’ Day, which falls every November 25th.

Earlier, Anggiat – often called Rindu – admitted he made a mistake in the incident between him and Arteria at Soekarno-Hatta Airport.

Miss also apologized to Arteria and Wasniar for the noise and rude behavior.

“Miss here doesn’t want to find justification, Miss makes a mistake, Miss is wrong, really wrong, there is no justification for what she does,” said Rindu.

He admitted that he wanted to consult with the Chief of Police of Metro Jaya, Inspector General Fadil Imran, about the continuation of the report prepared by one of his employees. Arteria also confirmed that the problems that had arisen between him and Anggiat had been resolved.

“I’ll coordinate with Mr. Kapolda Metro, Mr. Fadil, how is that?” Said Arteria.

According to him, the provisions of Law No. 13 of 2019 regarding MPR, DPR, DPD and DPRD (Law MD3), which requires its examination with the consent of President Joko Widodo (Jokowi), are one of the obstacles to the step of withdrawing the report.

He fears that the House of Honors (MKD) will issue a warning if he comes to the Soekarno-Hatta airport police station to withdraw the report.