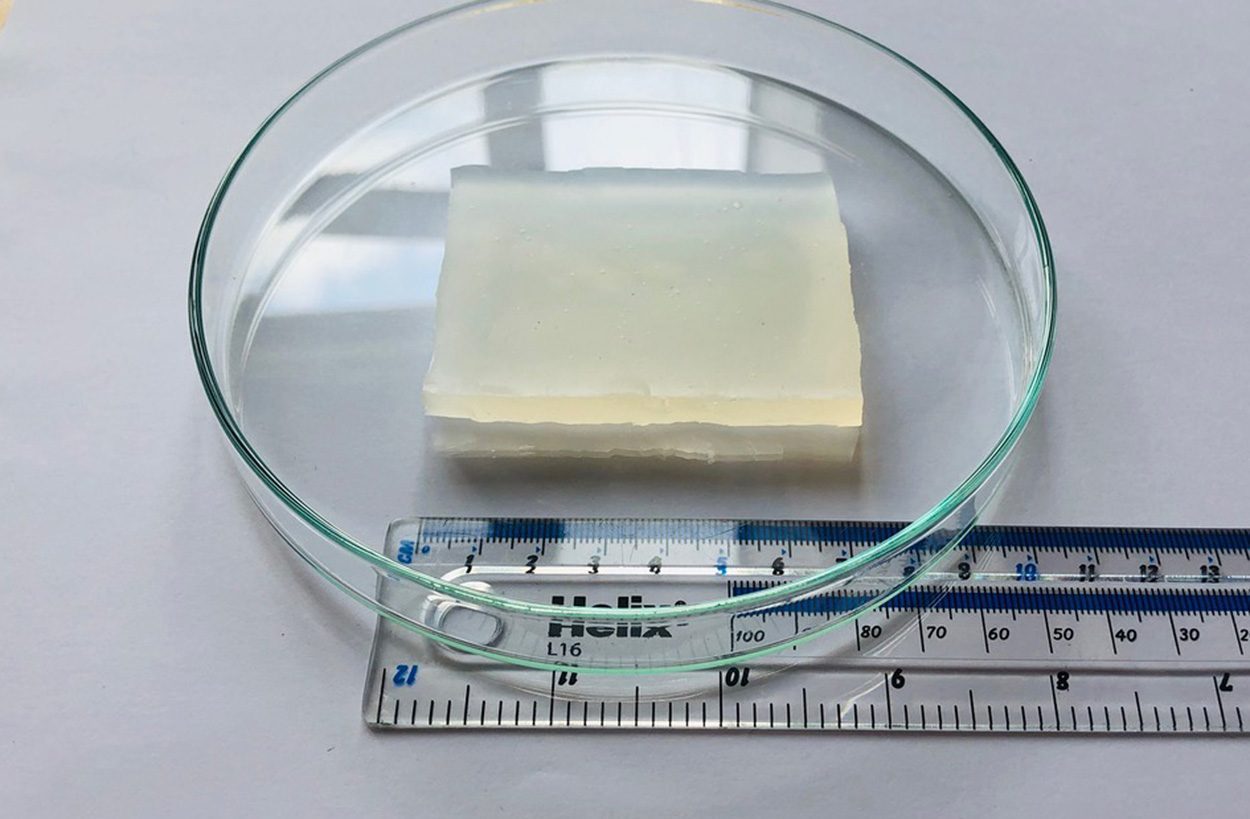 Hydrogels are real jack-of-all-trades among materials – they stick under water, become superabsorbents and are the main component of soft contact lenses. Now researchers have added one more thing to the diverse properties of these cross-linked polymer scaffolds: They have developed a hydrogel that becomes as hard as glass under pressure, but immediately returns to its soft gel state when it is relieved. The gel is so stable when compressed that you can even drive over it with a car. The scientists explain that the construction principle of these new types of hydrogels could open up new application possibilities.

Snails produce it, some crabs use it, and jellyfish are made almost entirely of it: hydrogel. This slippery mass in a wet environment consists of more than 80 percent water, but does not lose its structure even when immersed. At the same time, a hydrogel can become surprisingly strong, withstand enormous forces or stick to almost any surface. All of this is possible thanks to the special composition of the hydrogels. Their framework consists of cross-linked polymers that can bind water, but are themselves insoluble in water. As a result, the three-dimensional network of physically or chemically linked polymer chains swells in a moist environment and becomes soft and gel-like. In the dry state, on the other hand, depending on its composition and structure, a hydrogel can remain rubbery and elastic or solidify and be ground to a powder.

Now researchers have added another to the range of hydrogel properties: They have developed a gel that becomes rock-hard and stable like safety glass under pressure. “For years you mostly made rubbery hydrogels, but that was only half the picture,” says senior author Oren Scherman of the University of Cambridge. “We have now developed a new class of materials that can cover the entire range from soft rubber to hard as glass.” The starting point for the new hydrogel was the observation that the crosslinkers in most soft hydrogels give way slightly when force is applied. They are often based on hydrogen bonds and other non-covalent bonds that dissociate quickly. “We suspect that extending the shelf life of these crosslinkers allows the creation of supramolecular polymer networks that behave like glass-like materials,” explain Scherman, first author of Zehuan Huang from the University of Cambridge and her colleagues.

To do this, the researchers developed a hydrogel whose cross struts consist of so-called cucurbiturils – cage-like organic molecules that enclose and hold the two ends of the opposing crosslinkers as “guest molecules”. The cages ensure that the crosslinkers only react very slowly to forces that pull apart. “By changing the chemical structure of these guest molecules, we can control how well the material can withstand compression forces,” explains Huang’s colleague Jade McCune.

Can also withstand the weight of a car

In the laboratory, the researchers tested how stable different variants of this hydrogel they had produced were. It turned out that some gels could withstand pressures of more than one gigapascal – this is almost 10,000 times more than atmospheric pressure. Instead of yielding and being crushed, they became hard as glass under the compression. “The way the hydrogel withstood compression was surprising – we hadn’t seen anything like this in hydrogels before,” says McCune. This was also confirmed in a test in which the scientists rolled over a hydrogel plate measuring around seven by five centimeters with a 1.2-ton car. “Even after repeating it 16 times, no cracks or irreversible deformations were visible,” reports the research team. Instead, the hydrogel compressed and hardened under pressure, but regained its soft, original shape when the pressure was removed.

“To the best of our knowledge, this is the first time that vitreous hydrogels have been made,” says Huang. “This opens a new chapter in the field of high-performance gels.” In the opinion of the team, these modified hydrogels expand the possible uses of such materials considerably.