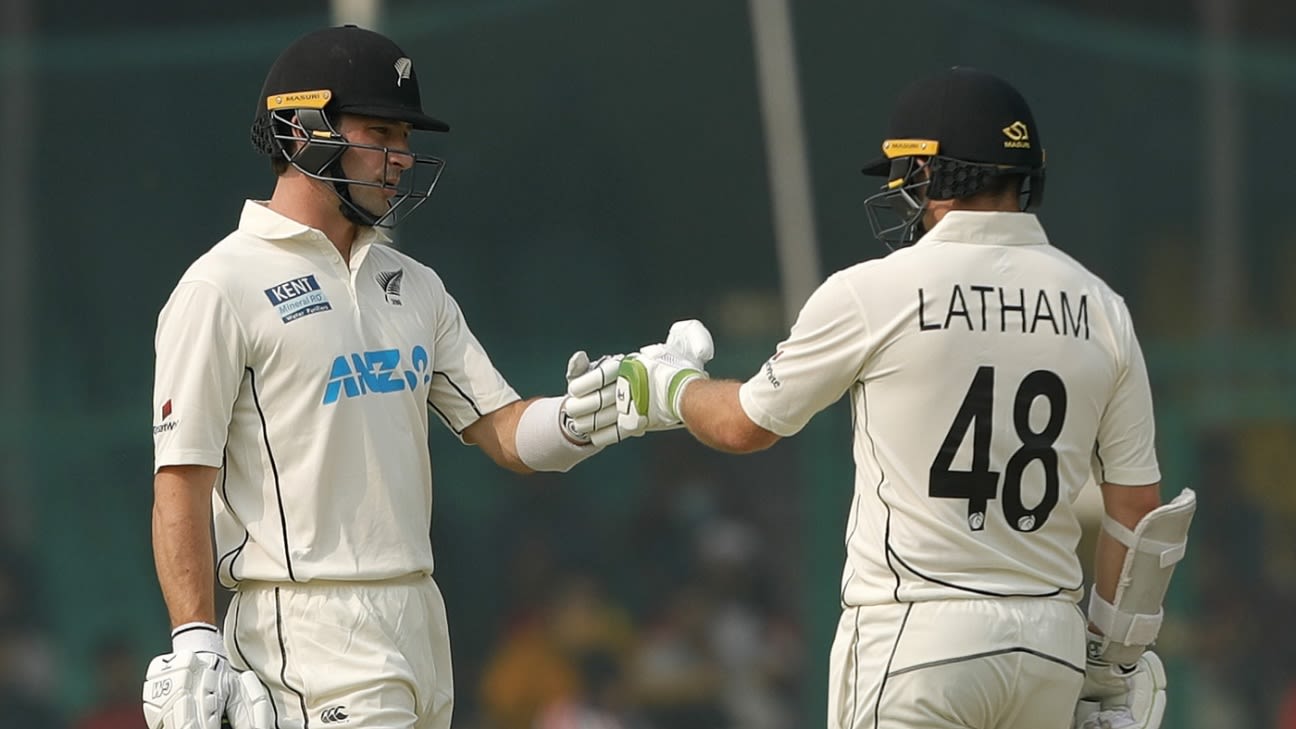 Tim Southee delivered one of a fast bowler’s great Test-Match spells in India to pull New Zealand back into the Kanpur Test before Will Young and Tom Latham put on a determined and unbroken 129 to make sure all four results were still in Game were after two exciting days.

After India was skittled for 345 shortly after lunch, India searched for 57 overs from every possible angle, but their five bowlers couldn’t separate New Zealand’s opening pair. While the ball occasionally grabbed and spun at right angles, and more frequently held low, the slowness of the surface allowed the clubs to adapt and survive.

Despite all of their frustrations over the last two sessions, India’s five-man attack kept bowling in control the entire time – especially in the post-tea session where they only got 57 runs in 31 overs – and kept the scoring going Quota was kept low and New Zealand went to stumps still more than 200 runs behind.

However, Young and Latham showed the rest of the New Zealand lineup a template for survival. Knowing the pitch wasn’t going to rush them, they let the ball come to, hitting it as far as possible directly under their eyes and not looking for scoring opportunities outside of their comfort zone. Against the spinners, Latham waited for the line to move outside the stump so he could sweep while minimizing the risk of lbw. That shot was his primary goal other than flicks and nudges down the leg.

Young meanwhile hit fifty with a flurry of drives against the weirdos before tea. But he was content to go scoreless for a long time in the final session as R Ashwin, Ravindra Jadeja and Axar Patel began to find their rhythm and the ideal speed and seam positions for this surface.

As the day drew to a close, all three spinners started beating the bat more often. Ashwin thought he caught up with Latham the penultimate day of the day and the umpire agreed, just to check that it was a bat brush rather than an edge. It was Latham’s third successful review; before tea he had been rated lbw twice from the inside edge, once against Umesh Yadav and once against Jadeja.

The first half of the day belonged to Southee. After relieving a groin strain on matchday one that took him off the field for parts of the game, he recovered enough – or bowled from residual pain – to collect four wickets in an uninterrupted period of 11 overs on the second morning to get his 13th -Wicket haul in test cricket and his second in India.

Starting the day at 258 for 4 with two half centurions on the border, India was eliminated with only 87 runs. Most of those runs came from Shreyas Iyer, who became the 16th India batter to score a century on the debut, and Ashwin, who scored a counterattack in 8th place with 38.

Kyle Jamieson was New Zealand’s most influential performer on day one, but he started day two completely out of sync and Iyer, who reappeared at 75, beat him for five fours in his first three overs of the morning to rush into the 90s. He brought back his hundreds at Jamieson’s next over with a choppy drive for two.

At this point, however, Southee had already made a decisive turning point. He started the day with four balls wide from Jadeja’s stump, dropped near the wicket, and the left-handers all shouldered their arms. He followed him with one swinging sharply into the stump and Jadeja, stuck in his crease, downplayed the wrong line and was hit on the back pad with an umpire’s verdict on the height that saved him after New Zealand had the initial non-decision.

However, Southee didn’t have to wait long to get his husband. A similar throw on his next over produced a similar leaden reaction, and this time the ball rattled over the inside edge into the stump.

The wickets kept coming back. A pair of outswingers who weren’t quite full enough to drive off the esteemed Wriddhiman Saha and Iyer; the first, delivered from a long way off the crease, pulled an off-drive along the wrong line, and the second, delivered closer to the stumps and swung away to confuse the batsman’s shape and get him to hit the ball to spoon up to the cover point.

Then, on his eighth over of the morning, Southee alternated left-handed axar with the heels of tangled seams straightening off the field. Axar played and missed the first ball with a ruffled seam, unhooked his bat, and hit the second to the goalkeeper. India were 313 for 8.

By this point, Ashwin was already on 20 of 22 balls after coming in, taking Southees Outswinger, and knocking him offside for three fours. Southee made three more overs to end the innings, but Ashwin went on strike, refusing to keep Umesh off the strike as far as possible.

Ashwin could have been sacked for 16 when he got off to Ajaz Patel and missed an attempted loft hit with the ball slipping low. The ball just missed the stump and bounced off Tom Blundell’s pad before he could react. It could have been the first wicket to fall on a spinner in that Test match, but like the first day – when he missed reviewing an LBW decision against Shubman Gill – luck wasn’t entirely with Ajaz.

After lunch, however, it turned when he threw one out of the footprints and off the outside edge to hit Ashwin and made one slip his arm to catch Ishant Sharma plumb in front of him.