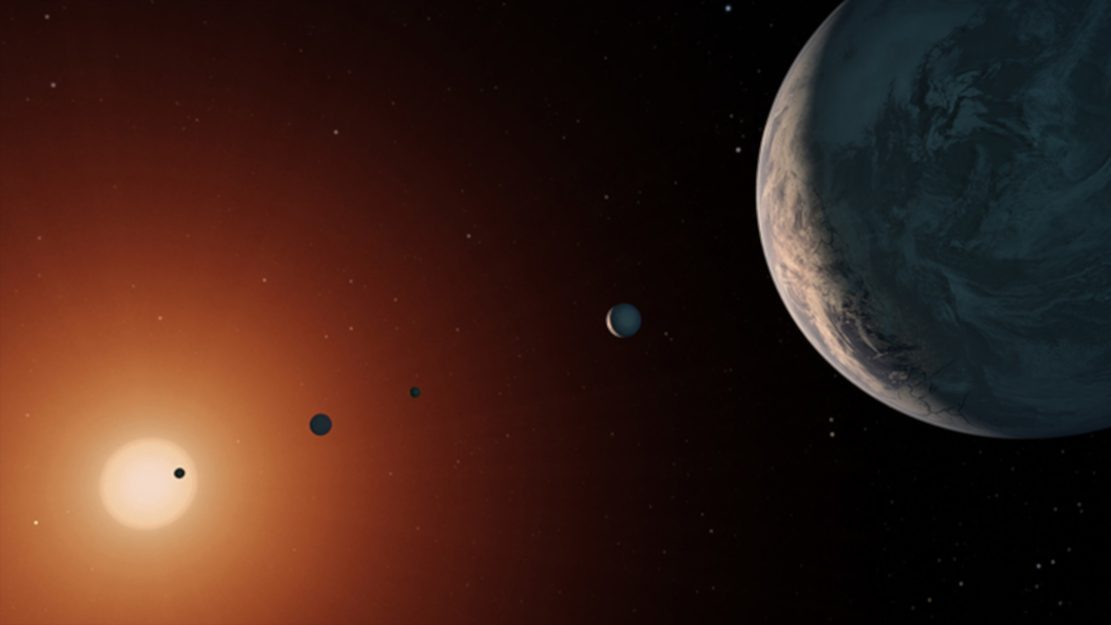 We had a comparatively violent crash: collisions between celestial bodies have clearly shaped the development of the solar system and the earth. A study now sheds light on how this was in the case of the exciting Trappist 1 system. The pronounced harmony in which the seven earth-sized rock planets move is evidence of a comparatively weak collision disturbance in the early history of the system. This, in turn, provides clues as to how the planets may have accumulated volatile substances like water, the researchers explain.

A set of seven worlds in its sights: TRAPPIST-1 is considered to be one of the most interesting star systems that astronomers have discovered while searching for exoplanets. According to previous studies, the red dwarf star, which is about 40 light-years away from us, orbits seven planets with exciting features: Density properties and signs of atmospheres prove that these are rocky planets that could theoretically offer life-friendly conditions. There are already indications that they could be water-rich.

On the trail of the collision history

Astronomers are therefore trying to elicit more and more secrets from the system. The focus of the researchers led by Sean Raymond from the University of Bordeaux in is the collision history of TRAPPIST-1. As they explain, insights into this can provide clues about the features of the planets today. Because in the case of the development of our solar system and the earth, one assumes an important role of the early cosmic crashes: After the formation of the planets from the dust disk around the sun, collisions and asteroid impacts shaped the constellations in our system. It is also assumed that a considerable part of the earth’s water reached our planet through impacts.

But how can one get clues about the collision history in a distant system if no rock samples or craters can be examined? As the researchers explain, the already known harmony in the TRAPPIST-1 system enables conclusions to be drawn. The orbital times of the seven planets named alphabetically from b to h are therefore in a so-called resonant arrangement to each other, reminiscent of harmonic music. The time the planets need for their close orbit around the small parent star is 1.5 days for planet b and 19 days for planet h. The harmony is characterized by the fact that in eight “years” on planet b five will take place on planet c, three on planet d, two on planet e and so on.

Raymond and his colleagues have now developed computer simulations to investigate the history of the formation of the planetary system and the possible role of collisions. As they explain, it can be assumed that resonant chains like those of TRAPPIST-1 are already formed before the protoplanetary disks disappear. After rocky planets have formed, they are then usually hit by other celestial bodies and remnants from the birth disk. During this process, called bombardment or late accretion, there may be shifts depending on the extent of the collisions. The simulations of the study now provide indications: “Although we cannot say exactly how much material hit the TRAPPIST-1 planet, we can at least set an upper limit due to its special resonance arrangement,” says Raymond. “Our computer simulations show that these planets were only bombarded with a very small amount of material after their formation,” the scientist sums up.

According to this, in contrast to Earth, probably only little volatile material such as water reached the TRAPPIST-1 planets through impacts. Should one of them still have a lot of the potential elixir of life, it should have been stored early in its history. One possible difference to the formation of the earth could therefore be that the TRAPPIST-1 planets had a hydrogen atmosphere from the beginning, explain the scientists.

In addition to the importance for this special system, the study results can also be used to investigate other resonant planetary systems – and also in cases in which a former harmony is suspected. “Super-Earths and Sub-Neptunes are very common around other stars and the prevailing idea is that they migrated inward during the gas disc phase and then possibly had a late phase with collisions,” says Raymond. “But during that early phase of migrating inward, we believe they had a phase of forming resonant chain structures like TRAPPIST-1.”

As far as the further investigation of the exciting set of seven is concerned, the scientists are now hoping for progress in astronomy: The James Webb Space Telescope from NASA and the Extremely Large Telescope from ESO could in future provide insights into the atmospheres of the distant worlds and thus clarify to what extent they are actually rich in water.