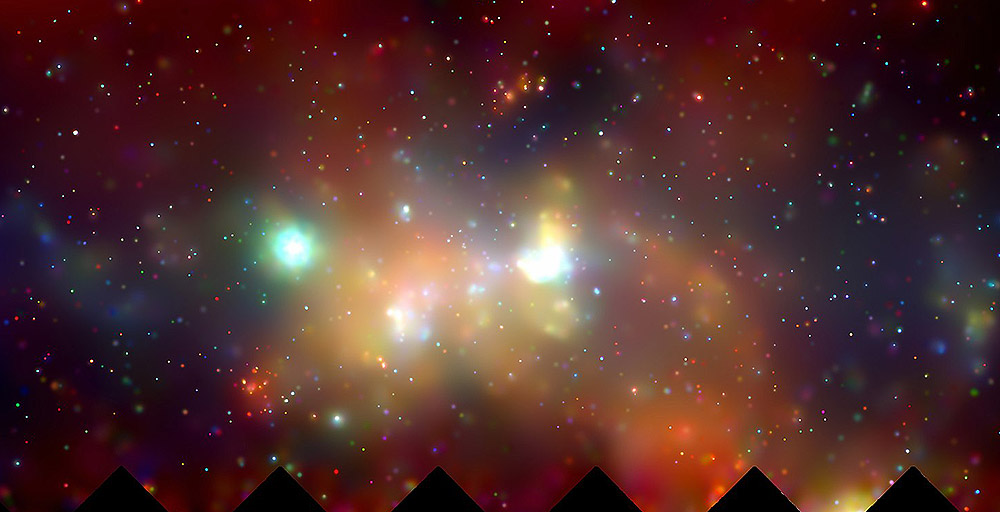 Blocked radiation: astronomers have discovered an invisible barrier in the center of the Milky Way. It prevents the cosmic radiation distributed in the rest of the galaxy from entering, so that this galactic sea of ​​radiation is thinned out there. Conversely, this barrier allows the radiation generated by the central black hole to pass to the outside, as measurements with the Fermi LAT gamma-ray telescope reveal. How the barrier was created and what it consists of is still open.

They are everywhere: our entire galaxy is filled with high-energy cosmic rays and particles. This galactic sea of ​​gamma rays is relatively evenly distributed over our Milky Way and is fed by countless different sources. Within the galaxy, star explosions, pulsars and also the central black hole Sagittarius A * expose the high-energy radiation. But extragalactic sources such as distant galaxy nuclei or neutron star collisions also contribute.

But there is obviously a region of the Milky Way into which this galactic sea of ​​radiation cannot easily penetrate. This was discovered by Xiaoyuan Huang from the Chinese Academy of Sciences in Nanjing when they were evaluating data from the Fermi-LAT gamma-ray telescope. From the results they created a kind of map of the cosmic rays in our galaxy.

This mapping initially confirmed that cosmic rays are relatively evenly distributed across large parts of the Milky Way. “The cosmic radiation density is almost constant, as predicted by the galactic radiation ocean scenario,” the astronomers report. In addition, a stream of somewhat harder radiation comes from the vicinity of the central black hole, which is generated by the high-energy processes in the vicinity of the supermassive black hole – so far, so expected.

Strange, however: According to the expectations, the galactic sea and the fresh gamma radiation from the black hole would have to be superimposed in the galactic center – and thus an increased radiation density. Instead, however, the diffuse portion of cosmic radiation in the central area of ​​the Milky Way decreased significantly. “The Fermi-LAT observations indicate that the part of the cosmic radiation sea is suppressed there,” reports the team.

In other words: around the galactic center there is a kind of barrier that prevents a large part of the diffuse cosmic radiation from the rest of the galaxy from entering. Conversely, however, the hard radiation from Sagittarius A * can apparently penetrate unhindered. “This spatial distribution is contrary to expectations,” write Huang and his colleagues. This invisible barrier appears to surround the galactic center at a distance of around 620 light years.

The cause is still unclear

What causes this blockage and why it seems to have only one-sided effect is still unclear. The astronomers suspect, however, that magnetic fields play a role. Similar to the way the solar magnetosphere shields the solar system from large parts of cosmic radiation, magnetic fields in the vicinity of the central black hole or their interaction with the galactic environment could also act as a barrier.

But it is also conceivable that the radiation pressure of the particularly dense stars in the galactic center pushes back the cosmic radiation coming from outside. Further studies must now clarify how the barrier in the Milky Way Center actually comes about. (Nature Communications, 2021; doi: 10.1038/s41467-021-26436-z)