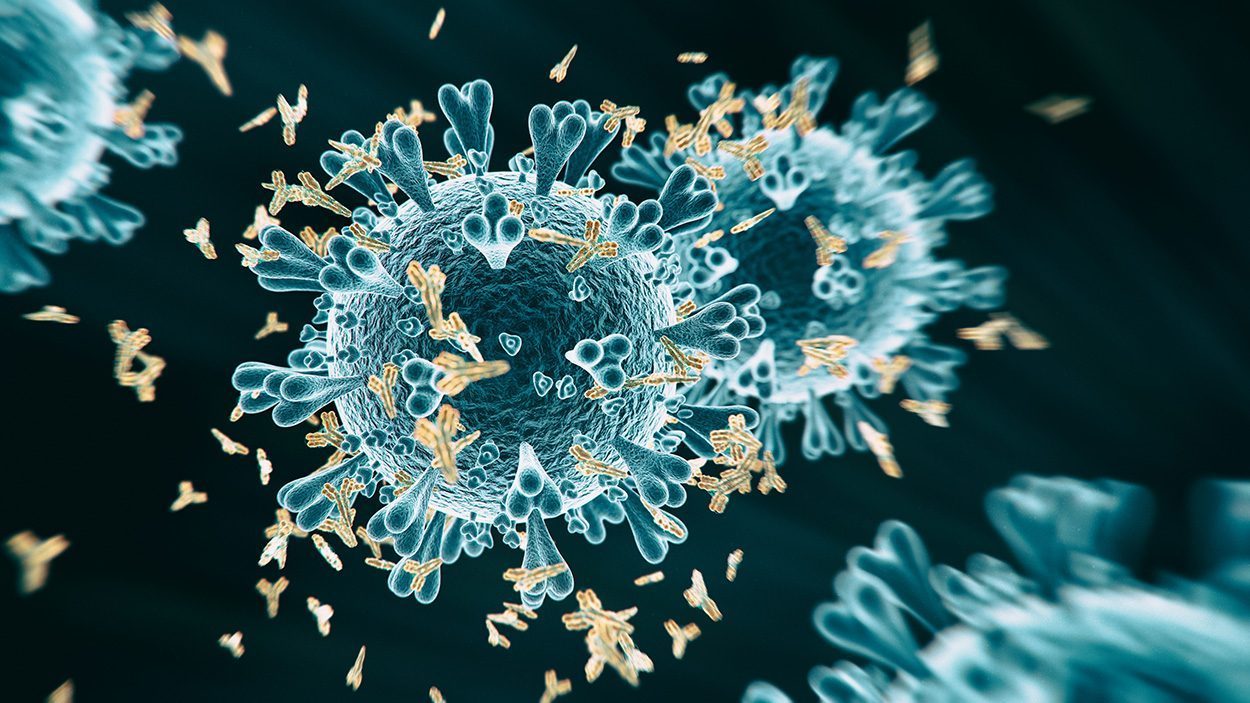 Anyone who has antibodies against harmless, long-circulating human coronaviruses from previous colds is probably better protected against severe Covid-19 courses. This is confirmed by a study that examined whether such antibodies also cross-react with the new Sars-CoV-2 coronavirus. Accordingly, the antibodies against cold corona viruses can to a certain extent also neutralize Sars-CoV-2. According to the researchers, people with high antibody levels against harmless coronaviruses have to be treated less often in hospital if they are infected with Sars-CoV-2.

Some pathogens from the coronavirus family have long been circulating in the human population. These so-called human coronaviruses (HCoV) usually only trigger harmless colds. Structurally, they are only distantly related to the novel coronavirus Sars-CoV-2. However, they have some characteristic surface structures in common. This leads to the question of the extent to which antibodies against the harmless cold coronaviruses can also bind to Sars-CoV-2 and how this affects the immune reaction and the course of the disease.

Some protection from Covid-19

A team led by Irene Abela from the University of Zurich has now addressed this question with the help of laboratory analyzes and computer simulations. The researchers examined blood samples from 825 donors taken before February 2020, i.e. before the occurrence of Sars-CoV-2, 672 blood samples from May 2020, when Sars-CoV-2 had already started to spread, and 389 blood samples of people who were verifiably infected with Sars-CoV-2.

In all blood samples, they determined the antibody titer against the four human coronaviruses circulating in the population. It showed: The group of Sars-CoV-2 infected people had the lowest titer of antibodies against cold coronaviruses on average. In contrast, people with more HCoV antibodies were less likely to be infected with Sars-CoV-2. “These results suggest that existing immune reactions to HCoVs can protect against Sars-CoV-2 infection to a certain extent,” conclude Abela and her colleagues.

Mild courses thanks to previous colds

In addition, the researchers analyzed how the HCoV antibodies affect the immune response against Sars-CoV-2. To do this, they modeled various antibody reactions on the computer. “According to our results, a stronger antibody reaction against human coronaviruses also leads to higher amounts of antibodies against Sars-CoV-2,” says Abela’s colleague Alexandra Trkola. “A person who has immunity against harmless coronaviruses is thus better protected against severe courses of Sars-CoV-2 infections.” Sars-CoV-2 infected, are treated less often in the hospital or in the intensive care unit.

According to the researchers, the protective effect of previous colds is probably based on both pillars of the immune response: on the one hand, on the so-called humoral immune response, in which antibodies bind to the virus, and, on the other hand, on so-called T-cell immunity, in which T-cells attacked Finding and destroying cells to stop the virus from spreading throughout the body. This means that previous colds have a similar – albeit significantly weaker – effect to a vaccination. “Immune reactions that are specifically directed against SARS-CoV-2 and that emanate from memory cells are of course far more effective than cross-reactive ones,” says Trkola. “But although the protection is not complete, cross-reactions shorten the course of the disease and alleviate its severity. And that’s exactly what we achieve with vaccinations, only much, much more efficiently. “

Cross immunity also the other way around?

The researchers point out that in their study they only found associations that do not necessarily suggest a causal relationship. “Still, the implications of our results are obvious,” they write. “A previous immunity to HCoV can to a certain extent protect against the acquisition of Sars-CoV-2, promote the development of a Sars-CoV-2-specific immunity and thus reduce the risk of severe hospitalization. A slight protective effect through HCoV immunity would be a plausible explanation for the high proportion of asymptomatic and mild SARS-CoV-2 infections. “