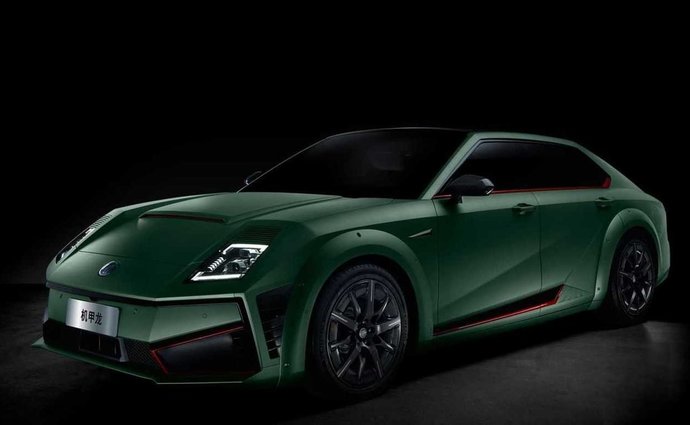 The Chinese took the name Mecha Dragon from the Mega Man game series. The automaker then opted for the Limousine brand for a new range of modern electric vehicles.

And if they are all as distinctive in design as the first representative, we probably have something to look forward to. The sloping rear impresses with a rather eye-catching design full of edges, recesses and sport features, which include extended fenders, an aggressive front bumper, convex bonnet, various aerodynamics, fake ventilation openings, active rear spoiler, diffuser or fake tailpipes.

It’s probably too much, so the car looks like it came into the real world from a computer game. Or maybe a comic. On the other hand, the design is so unique and one of a kind that you probably won’t find a car similar to it.

Additionally, it won’t be a pencil sharpener in terms of dynamics. The drive is provided by two electric motors, the combined power reaches 405 kW and a torque of 750 Nm. That’s why the sedan got Michelin sports tires and Brembo brakes.

The battery with a capacity of 115 kWh should guarantee a range of around 800 kilometers (according to the Chinese CLTC method). Mecha Dragon can also charge 480kW, so, according to the car manufacturer, it can charge enough electricity for around 400 kilometers in 10 minutes.

The manufacturer highlights advanced autonomous driving systems that include multiple cameras, four LIDARs, various radars and a range of sensors. In the cabin we find a dashboard with a huge display and a digital instrument panel. And the seats look interesting too.

It is also noteworthy that Saloon Mecha Dragon is produced in limited numbers, there are only 101 copies. The price should start at around 1.7 million crowns.