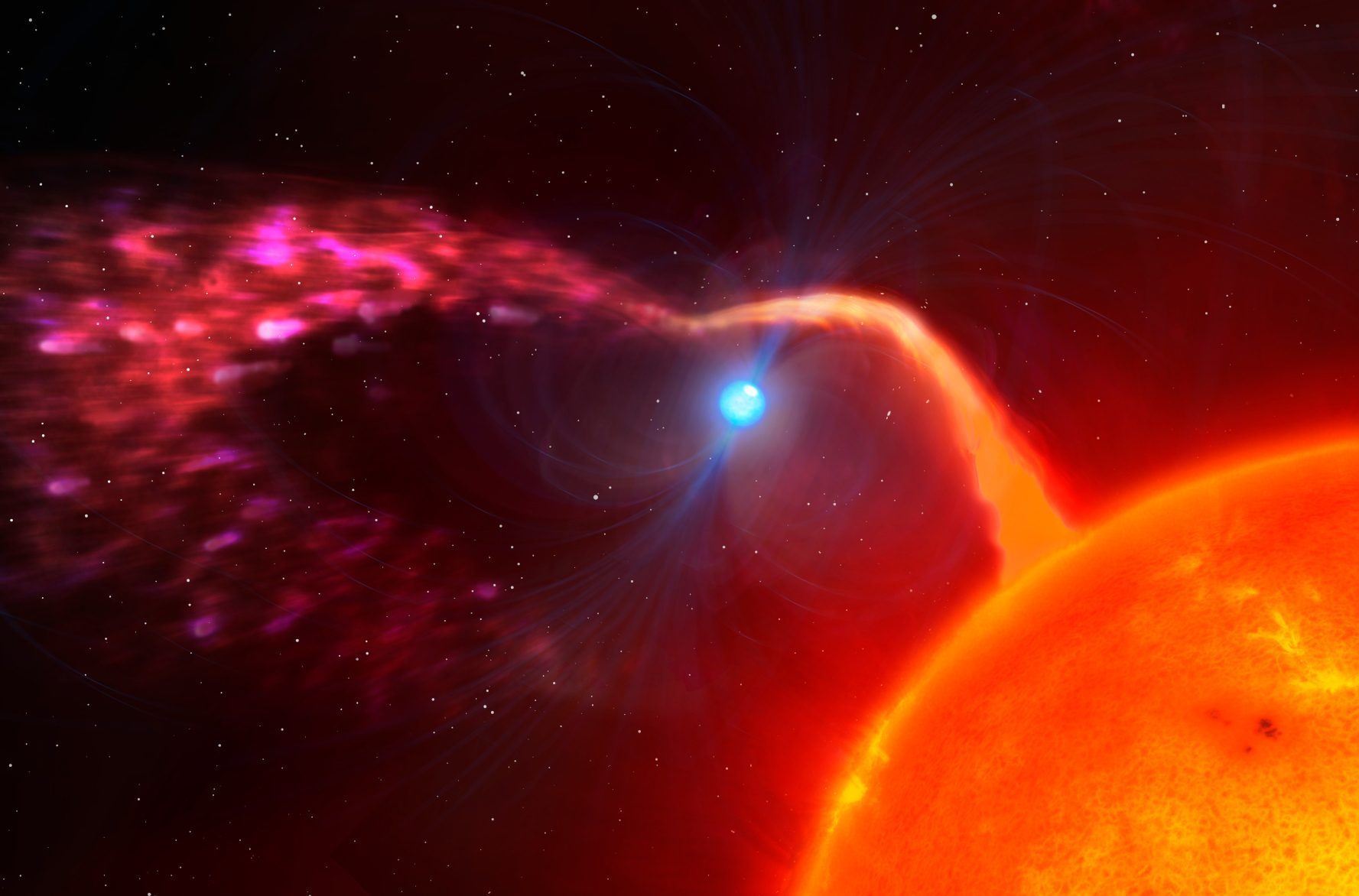 A stellar freak in their sights: Astronomers report on what is now the fastest known representative of the white dwarfs. The roughly earth-sized celestial body rotates around its own axis in just 25 seconds. In doing so, it develops the effect of a propeller: it snatches matter from a nearby companion star, which it then hurls into space with the force of its magnetic field at a speed of around 3,000 kilometers per second. The star is now the second known representative of a magnetic propeller star.

Burned out, pale and small – but extremely massive: white dwarfs are “dead” stars that have burned all their fuel and then shrunk to extremely dense remains. Often they only have planetary dimensions, but are as heavy as stars. Numerous specimens of these celestial bodies are already known. Some of them are characterized by an astonishingly high rotation speed. Pulsars can turn much faster – but they are much smaller. The previous record among the white dwarfs was held by CTCV J2056-3014 with around 29 seconds per revolution.

Another celebrity in its star category has been the white dwarf AE Aquarii. In addition to its high rotational speed, it is characterized by an additional specialty: it was called a propeller star because it whirls matter from a nearby companion star into space at high speed. Now the astronomers around Ingrid Pelisoli from the University of Warwick present a second example of such a propeller star, which at the same time sets a new record for speed among the white dwarfs.

Speed ​​recognized by the flickering

Earlier investigations have already shown that the white dwarf with the designation LAMOST J024048.51 + 195226.9 – J0240 + 1952 for short – is about the size of the earth, but has at least 200,000 times more mass. Like AE Aquarii, it is also part of a binary star system. The white dwarf looks almost like a planet from its large partner, but its immense gravity pulls material from it in the form of plasma. There were already indications that J0240 + 1952, like AE Aquarii, throws this matter into space. However, in order to characterize it as a magnetic propeller star as well, information about its rotation has so far been lacking.

To examine J0240 + 1952 more closely, Pelisoli and her colleagues have now targeted the white dwarf with the HiPERCAM instrument at the Gran Telescopio Canarias on La Palma. The extreme light sensitivity of the system made it possible to reveal even fine details of the radiation reaching us from the pale celestial body. As the astronomers explain, some of the matter that the star pulls away from its partner ends up on its surface. This creates bright spots which, when J0240 + 1952 rotate, cause pulsations in the light. Based on these observations, the researchers were now able to determine the rotational speed.

From the individual case to the category

They found out: What takes 24 hours on earth, J0240 + 1952 does in 25 seconds. This value is four seconds lower than in the case of the previous record holder CTCV J2056-3014. “The rotation is so fast that the white dwarf has to have an above-average mass in order to hold together and not be torn apart,” says Pelisoli. As the researchers explain, the precipitation of the plasma withdrawn from the companion star in the equatorial region probably led to this high rotational speed in the history of the star. At some point in its history, however, J0240 + 1952 developed a strong magnetic field that now hurls most of the attracted plasma away at up to 3000 kilometers per second. Only a remainder flows in the direction of the magnetic poles of the star and ensures the measured pulsations of the light there, explain the astronomers.

With their results, they were able to confirm that J0240 + 1952 represents another representative of the propeller star category. “It’s the second time we’ve found one of these magnetic propeller systems, so now we know it’s not unique,” said University of Warwick co-author Tom Marsh. “With this we prove that the magnetic propeller mechanism is an effect that can occur in binary star systems if the circumstances are right,” says the astronomer. Finally, Pelisoli once again emphasizes the second aspect of the amazing celestial body: “In the time in which you were reading these lines, J0240 + 1952 made several revolutions,” says the scientist.