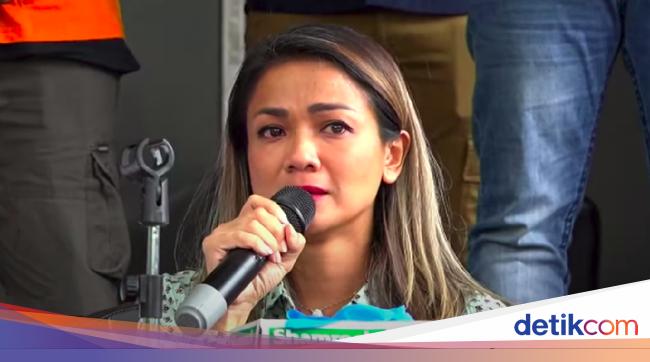 He met Riri Khasmita for the first time at a press conference in Polda Metro Jaya, Thursday (November 18), Nirina Zubir unable to contain his feelings. Riri Khasmita and her husband Endrianto and notary Faridah were also introduced as suspects in the land mafia case at the press conference.

“Before I was here, I also had to deal with my emotions because this was my first meeting after … after the people behind me became suspects and were finally arrested, especially to …Gut, Riri’s brother, ”said Nirina as she turned to Riri Khasmita.

While he holds back the tears Nirina continued his speech. Nirina then pointed to Riri Khasmita.

“… That my mother saved from her stepfamily, which she did not accept, was taken to my mother’s house and got a decent job. That’s the person ”, Nirina held back the tears.

Nirina admitted that it was very difficult for him to meet Riri after what his former family member had done. In addition, Riri never apologized to him for robbing his mother’s fortune.

“It is very difficult for me to meet him and he has no intention of apologizing until this moment,” said Nirina.

Nirina always more emotional when conveying Riri’s attitude, which seemed innocent. Even until he became a suspect and was arrested, Riri displayed an attitude that made Nirina’s emotions overflow.

Read more on the next page….