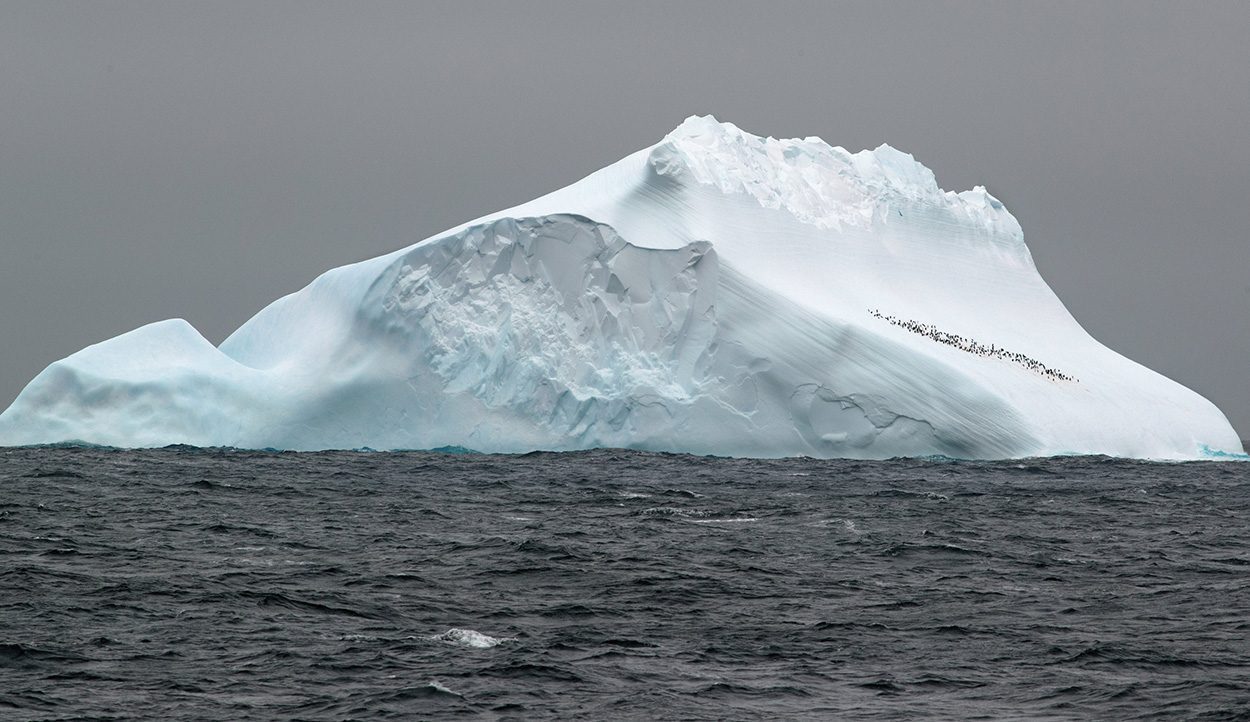 When the earth warmed up after the last ice age, the ice of the Antarctic reacted surprisingly quickly: It only took an average of ten years to trigger enormous bursts of thawing and iceberg calving. However, these melting phases then lasted for many centuries, as scientists have found out. This suggests that the Antarctic ice could reach its tipping point just as quickly as a result of current climate change.

Global warming is now measurably affecting even the supposedly “eternal” ice of the Antarctic. The large glaciers are melting faster and faster, especially along the West Antarctic Peninsula. Because the seawater flowing from the southern ocean onto the continent’s shelf base is getting warmer and warmer, it thaws the floating tongues of ice on the coastal glaciers and the ice shelves from below.

How sensitive is the Antarctic?

Scientists already fear that this thawing of the Antarctic ice sheet has already passed a tipping point in at least part of West Antarctica – a threshold above which the melt becomes independent and continues irreversibly for centuries. “Despite the growing evidence of current and future instability of the Antarctic ice sheet and the concern about rising sea levels as a result, there has so far been no data series showing the speed, timing and extent of past ice losses in combination,” explains Michael Weber from the University of Bonn and his colleagues. That makes it difficult to estimate how quickly and how strongly the Antarctic ice might react to climate change and overturn.

Help is now provided by data from the so-called iceberg avenue off the east coast of West Antarctica. This marine region marks the main route of icebergs breaking off the Antarctic Ice Sheet and then drifting north with the current along the coast. Because the icebergs gradually thaw on this drift, their underside gradually releases sediment and debris, which sinks to the sea floor along the route. The amount of accumulated iceberg debris reveals how many icebergs calved at a certain time and drifted away on the “iceberg highway”.

Eight melting spurts with a sharp rise in sea level

This is where Weber and his team come into play: To find out how the warming of the earth after the last ice age affected the Antarctic ice sheet, they examined sediment cores that had been removed from two places in the iceberg avenue. They contain layers that were deposited around 19,000 to 9,000 years ago. Using the amount of iceberg pebbles in these layers, the researchers were able for the first time to understand more precisely when, how quickly and how long there were strong defrosting phases in the post-ice age. In addition, the team also used sediment cores from the Ross Sea and an ice core from West Antarctica, which documents the loss in volume of the ice masses during this time period.

The evaluations showed that there were eight phases in the post-glacial warm phase with particularly strong thawing of the Antarctic ice sheet. They show up both in the iceberg debris that was deposited more abundantly during these times and in the supplementary data. In these melting spikes, a particularly large number of icebergs calved and drifted north. In one of these thrusts, known as MWP-1A, around 14,500 years ago, 1,300 gigatons of ice could have broken off per year. Their melting alone could have led to a sea level rise of seven to eleven meters within the 400 year melting phase, as Weber and his team report.

Tipping point reached within a decade

More importantly, however, these phases of strong defrosting started surprisingly quickly. It took less than a decade to destabilize the Antarctic ice sheet in such a way that it was followed by a melting phase lasting centuries to millennia. “The pace of just a decade to make a system tip over is actually pretty scary, because if the Antarctic ice sheet behaves in the future as it did in the past, we’ll be witnessing the tipping right now,” says Weber. So far, models have suggested that the ice in West Antarctica needs around 60 years of the currently observed melting rate to get out of balance and “overturn”. “Our data from Eisberg-Allee indicate that this can happen more quickly, within a decade or two,” the researchers say.

If this is confirmed, then the ice, especially in West Antarctica, could be much closer to the tipping point than assumed – or even have passed it. “Our results are consistent with a growing body of evidence suggesting that the acceleration in Antarctic ice loss over the past few decades could mark the beginning of a long and irreversible period of ice sheet retreat,” says Weber.