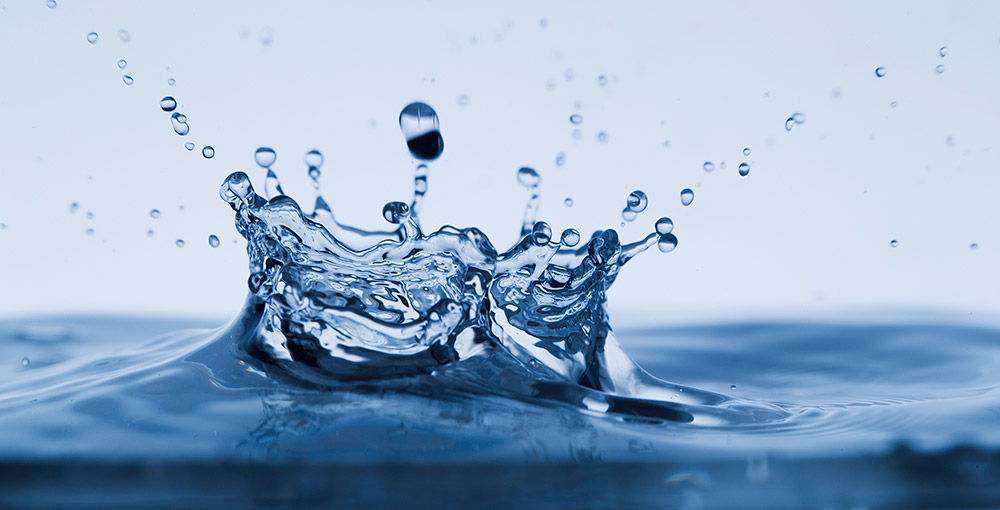 Underestimated effect: with every downpour, huge amounts of tiny microplastic particles are apparently ejected from the ocean into the atmosphere, as a study has now revealed. Because every drop that hits the water sprays an average of around 100 particle-laden subsequent droplets upwards. Worldwide, this drop-related transport adds up to around 100 trillion microplastic particles transported into the air by rain every year.

Whether in the ocean, in the ground or on the highest mountains: microplastics have long been everywhere. These tiny plastic particles can also be found on Mount Everest or in the deepest deep-sea trenches. They are spread with the ocean currents and also through the air. Microplastics can even be detected in our drinking water, food and in our own tissues and organs.

Falling drops in the laboratory and model

The study by Moritz Lehmann from the University of Bayreuth and his colleagues has now revealed how mobile the tiny plastic particles are. With the help of experiments and model simulations, you investigated what happens when raindrops fall on the ocean surface contaminated with microplastics: How much water splashes up? And how many microplastic particles are pulled up out of the sea water?

“Experiments alone would have provided too little information. That is why we have developed a completely new code for simulating these processes and developed a computer model that allows these questions to be answered with high accuracy and in an unprecedented level of detail, ”explains senior author Stephan Gekle from the University of Bayreuth.

The analyzes showed that if a raindrop about four millimeters in diameter hits a surface of water, it hurls an average of 167 smaller droplets from a ring-shaped area around the point of impact into the air. These spray droplets come from a depth of a few millimeters below the surface of the water and are thrown up to 80 centimeters high. In the laboratory tests, too, each falling drop produced more than a hundred spray droplets.

But what happens when the surface of the water – for example the ocean – contains microplastics? The researchers also investigated this both experimentally and virtually. It turned out that because the sprayed-on cloud of droplets consists almost exclusively of seawater, the plastic it contains is also swirled into the air. “The particle concentration in the ejected droplets is on average 87 percent of the content in the exit pool,” the scientists say.

Thermal currents keep the microplastic in the air

In concrete terms, this means that if the water surface contains around 5,000 plastic particles per cubic centimeter, then around 136 microplastic particles are released into the air through the spray droplets of each individual raindrop. “This also means that there is no filter effect that holds back the microplastics,” explain Lehmann and his colleagues. “Even if the raindrop is free of particles, its splash water contains primarily contaminated seawater, while it is ingested by the ocean itself.”

Under ideal conditions, the majority of the contaminated spray droplets fall back into the water quickly: “Without updrafts, the flight time is less than a second,” report the researchers. But there are usually significant updrafts above the surface of the ocean – on average, air rises there at a rate of one meter per second. These updrafts also pull the spraying droplets up into the air – and with them their plastic load.

Once in the air, the spray droplets evaporate very quickly due to their small size, usually less than 0.25 millimeters. As a result, however, they release the microplastic contained in them and this can now be carried on with the wind.

Lehmann and his team have also determined how much microplastic is released from the oceans into the atmosphere in this way. They based their estimate on the average precipitation over the oceans, the mean drop size and the area of ​​the seas. They also assumed a microplastic content of around 2.9 particles per liter of seawater and updrafts between 0.5 and 1.5 meters per second.

The result: “Based on our simulations and this data, we estimate that up to 100 trillion microplastic particles are released into the atmosphere through rainfalls over the oceans. However, depending on the microplastic density in the various marine areas, there could be significant regional differences, as the team emphasizes. Satellite measurements in connection with weather models could, however, provide more precise information about these “hotspots” in the future. (Microplastics and Nanoplastics, 2021; doi: 10.1186 / s43591-021-00018-8)