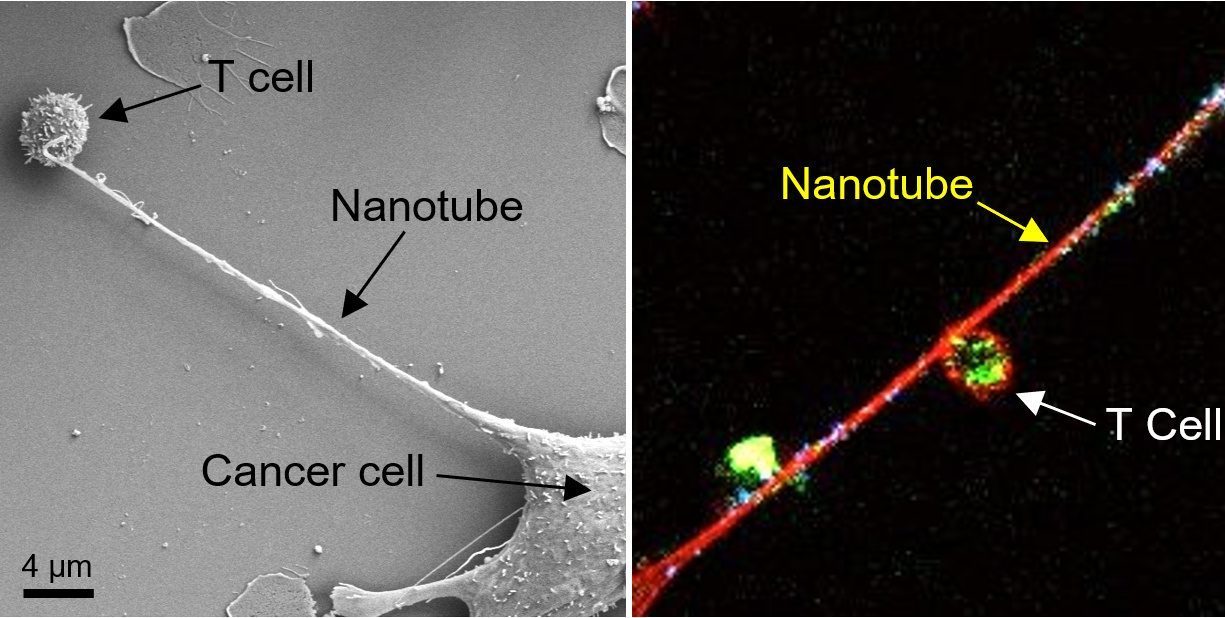 Tracking down malignant strategies: Researchers have discovered a mechanism that helps tumor cells evade the immune system. They reach for defense cells through tentacle-like nanotubes and then withdraw mitochondria from them. By stealing the cell power plants, the cancer cells weaken their opponents and at the same time strengthen themselves. The discovery of this strategy has medical potential, say the researchers: A suppression of the formation of nanotubes by certain active ingredients could support cancer treatment, initial successful experiments have already shown hope.

The danger of developing cancer accompanies us through life. Because in our body some cells are constantly degenerating due to mutations in their genetic make-up. If these genetic characteristics allow them to grow uncontrollably, growths form that can eventually spread throughout the body. But normally our immune system recognizes these potentially dangerous mutants and eliminates them: Specialized units of the body police can identify degenerated cells based on certain characteristics and then ensure that they are combated.

How does cancer escape the immune system?

Unfortunately, as is well known, this system does not always work effectively enough. One factor is that cancer cells evade the immune system by using certain traits or skills. The elucidation of the various protective strategies of tumor cells is therefore of great importance for the development of new therapies against cancer. A team of US scientists headed by Harvard Medical School in Boston is dedicated to this research topic. Her focus is on the physical interactions between cancer and immune cells at the nano level.

The researchers made their current discovery while observing breast cancer cells that were cultivated together with immune cells in the laboratory. As they report, they encountered structural abnormalities during examinations using scanning electron microscopy: the cancer cells seemed to connect to nearby immune cells via tentacle-like structures. The width of these nanotubes was mostly only in the range of 100 to 1000 nanometers. For comparison: a human hair is around 80,000 to 100,000 nanometers wide. In some cases, the structures associated with the immune cells also appeared to merge into thicker tubes.

To find out what happens when the tentacles come into contact with the immune cells, the scientists marked certain components in the examined cells with specific fluorescent dyes. So it finally became apparent that mitochondria were sucked out of the immune cells through the nanotubes and then drawn into the cancer cells. “By observing the intracellular structures, we saw how these delicate nanotubes stole the source of energy from the immune cells,” says senior author Hae Lin Jang of Harvard Medical School. “It was very exciting because this type of behavior had never been seen in cancer cells before.”

By investigating the energy turnover in the cancer and immune cells, the researchers were able to confirm: After the co-cultivation and the associated transfer of mitochondria, the receiving cancer cells gained “strength”. In the immune cells, on the other hand, the loss of organelles led to a weakening. The researchers emphasize that the function of the mitochondria is known to play an important role in the activation of immune cells. And in the case of cancer cells, a good energy supply is in turn associated with a high rate of division. “Cancer is fatal when the immune system is suppressed and cancer cells can metastasize, and it seems that these nanotubes can help them with both,” says first author Tanmoy Saha of Harvard Medical School.

In subsequent experiments, the scientists were able to show that the formation of nanotubes and the associated mitochondria transfer can be suppressed by certain substances in the cell cultures. They then carried out their first experiments in a mouse model: They injected test animals with cancer with an inhibitor for the formation of the nanotubes. In combination with other treatment measures, a clear contribution of the substance in the containment of tumor growth emerged.

“One of the goals in cancer immunotherapy is to find combinations of treatments that can improve outcomes,” says Saha. “Our observations suggest that an inhibitor of the formation of nanotubes could be combined with cancer immunotherapies and tested to see if it could improve the results for the patients,” says the scientist.