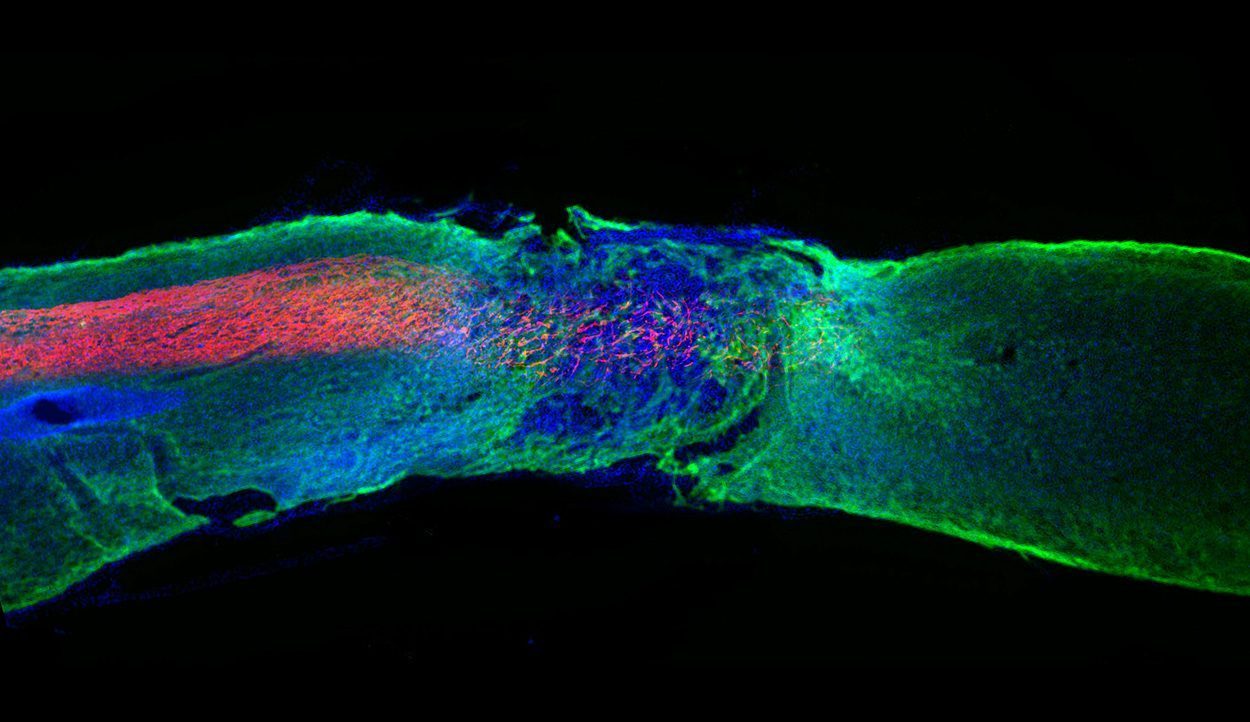 For people who are paralyzed due to a severe spinal cord injury, there are hardly any treatment options. For a long time it was considered impossible to get the severed nerve pathways to regenerate. Now researchers have succeeded in doing just that: A special mixture of molecules that mimick the natural environment of the cells of the spinal cord and interacts with them through bioactive signals ensured that injured spinal cord regenerated in mice. Further studies should enable the therapy to also be used in human patients.

The spinal cord is the link between the brain and the rest of the body. It forwards signals from the brain to the limbs and transmits the sensations from the body back to the brain. If this connection is disrupted – for example because important nerve fibers in the spinal cord have been severed due to a serious injury – the person affected is paralyzed and can usually neither feel nor actively move the respective body parts. Once cut, the corresponding nerve fibers cannot reproduce. This is due, among other things, to the fact that the cells themselves cannot or only insufficiently produce the proteins that would be necessary for regeneration, and their micro-environment ensures that the damage does not spread further, but at the same time prevents healing.

A team led by Zaida Álvarez from Northwestern University in Chicago have now found a way of allowing injured spinal cord to grow back – at least in mice. To do this, they used a special mixture of materials to mimic the proteins that give the cells the impulse they need to regenerate. “The signals used in the study mimic the natural proteins that are required to trigger the desired biological reactions,” explains Álvarez. “However, proteins have an extremely short half-life and are expensive to manufacture.”

Instead, the researchers used synthetic molecules, so-called peptide amphiphiles, which after injection into the spinal cord self-assemble into fibers, form flexible bonds and interact with the receptors of the cells. “Our synthetic signals are short, modified peptides that – if linked in thousands – survive for weeks and provide bioactivity,” says Álvarez. “The result is a therapy that is less expensive to manufacture and lasts much longer.”

The spinal cord grows back

The researchers attached two different biological signal molecules to the peptide amphiphiles: One was a growth factor that stimulates the damaged nerve cell processes, the so-called axons, to regenerate. The other caused the formation of new blood vessels to supply the nerve cells, thus helping the damaged neurons to survive. Overall, the therapy supported healing in five complementary ways: the axons regenerated, scar tissue, which can form a physical barrier for repair, decreased, the insulating myelin layer around the axons re-formed, new blood vessels formed and survived more neurons.

In their experiments with mice and on cell cultures with human nerve cells, Álvarez and her team also came across a decisive factor for the effectiveness of the therapy: the mobility of the injected molecules. “Receptors in neurons and other cells are constantly in motion,” explains Álvarez colleague Samuel Stupp. “The most important innovation in our research is the control of the collective movement of more than 100,000 molecules within our nanofibers. By getting the molecules to move or even temporarily jump out of these structures called supramolecular polymers, they are able to bind to receptors more effectively. ”To achieve this effect, the researchers modified the Structure of the molecules in such a way that they form less firm bonds with one another.

It is still unclear exactly why increased mobility is associated with improved effectiveness. “Since the cells themselves and their receptors are in constant motion, one can imagine that molecules that move faster will encounter these receptors more often,” suggests Stupp. “If the molecules are sluggish and not so ‘sociable’, they may never come into contact with the cells.” From the researchers’ point of view, their results can help develop therapeutics that trigger the regeneration of the spinal cord in human patients. Since the synthetic molecules are broken down within twelve weeks and completely disappear from the body, Álvarez and her colleagues assume a good safety profile.

“Our research aims to find a therapy that can prevent people from becoming paralyzed after severe trauma or illness,” says Stupp. “In addition, new scientific knowledge about the treatment of spinal cord injuries could have an impact on strategies for neurodegenerative diseases and stroke. In addition, our fundamental discovery of controlling the movement of molecular assemblies to improve cell signaling could be universally applied to all biomedical goals. “